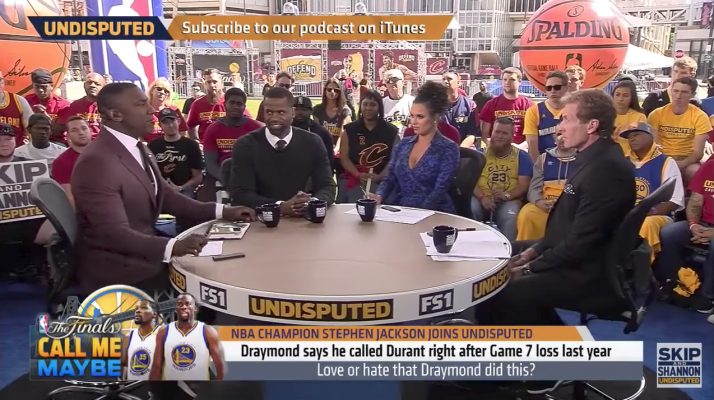 With reports and even direct confirmation from Draymond Green himself that he made a phone call to Kevin Durant in the parking lot of Oracle Arena immediately following the Golden State Warriors’ Game 7 loss to the Cleveland Cavaliers in the 2016 NBA Finals, it seems that a couple of talk show hosts have taken offense.

The outrage stems from the fact that Green called Cavaliers forward LeBron James a “b—-” in Game 4 of the 2016 NBA Finals, but then went on to recruit one of the best players in the league immediately after his team had lost.

“He stood face to face with LeBron James and called him a b—-. Now who the real b—- if he gonna jump on the phone and call somebody to come join him,” said “Undisputed” co-host Shannon Sharpe.

“You know what? For the first time all week here in Cleveland, I completely agree with you,” said Skip Bayless in response to Green’s actions. “Draymond looked like the b—-. He did. He did. … There’s no way I respect that he got on the phone in parking lot, after your team was up 3-1 and you got suspended for that word (b—-) and for kicking him in the man region after that?”