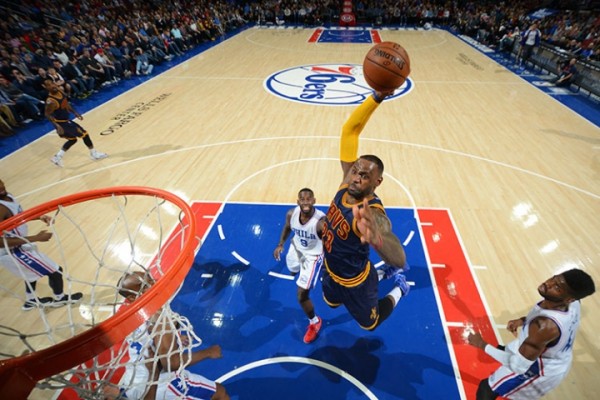 (Philadelphia, PA) – Torrid outside shooting by LeBron James paced the Cleveland Cavaliers to their seventh straight win as they managed a hard-fought 95-85 victory over the Philadelphia 76ers at the Wells Fargo Center on Sunday night.

James led the way with 37 points, drilling 15–of-22 attempts from the field, missing a double-double by finishing with nine assists while also contributing seven rebounds. Meanwhile Kevin Love did tack on a double-double with 15 points and 15 rebounds, and was joined in that category by Tristan Thompson, who added 10 points and 10 rebounds.

Speaking after the game, James discussed his ability to take over a game:

“I’m even keel, I don’t get rattled,” said James. “When other guys get frustrated, I have to stay composed.”

The shooting by James was in drastic contrast to the rest of the team, who struggled all night. That was evident by the collective shooting percentage of that group, who hit just 29 percent of their field goal attempts.

Love spoke about the weak shooting on the evening:

“We were getting a lot of great shots,” said Love. “It’s one of those game where we just didn’t knock it down.”

Every time the Cavs looked to be on the verge of breaking the game open, Philadelphia battled back. After the break, Cleveland moved out to a 72-60 led with over three minutes left in the third quarter, but by the end of the period, the margin had been sliced in half at 75-69.

Finally, clinging to an 81-79 advantage with 8:22 left, the Cavs ran off 14 unanswered points over the next six minutes to put the game away. James scored all but two of those points.

“He’s been doing that for a long time,” said Blatt. “You just hope it doesn’t reach a point where you need that, but we’re glad we have that available.”

James explained how he was able to flourish in the final quarter:

“I was able to get enough of a break where I came in with a lot of energy,” said James. “I realized that when I went back into the game, I needed to make plays.”

In the first half, the Cavaliers hit on just 33 percent of their attempts. An especially rough period spanned the two quarters, with the Cavs missing 14-of-19 attempts during that nine-minute stretch. That inability to develop a consistent shot helped the 76ers stay in the game.

“The experience. We have the more mature team,” said Blatt. “But they (76ers) played a heck of a game and they weren’t going to make things easier for us.”

The win improves the Cavaliers season record to 26-9, while the 76ers maintain the league’s worst record at 4-36.