Don't Miss
Home / Game Reports / Report: NBA Announces If There Will Be Suspensions for Game 4 Incidents

Report: NBA Announces If There Will Be Suspensions for Game 4 Incidents 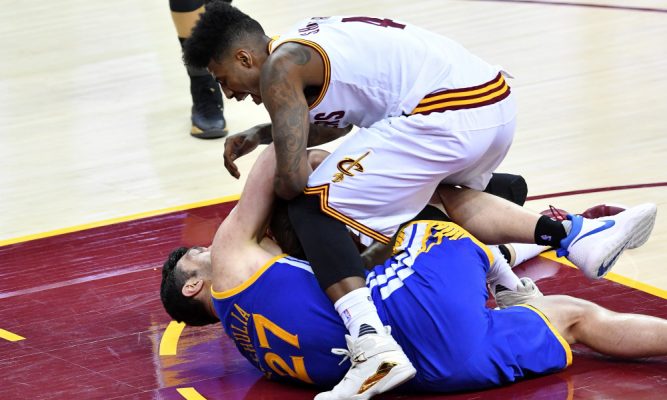 In an effort to put an end to the controversies over the player scuffles, arguments and technical foul calls that were called in Game 4 of the NBA Finals, the NBA announced on Saturday afternoon that they would not assess any disciplinary actions against players from either the Cleveland Cavaliers or Golden State Warriors.

No extra discipline coming from the NBA based on the Cavs-Warriors plays reviewed from Game 4, I'm told.

Three specific situations sparked the most controversy, with two of them involving the Warriors’ Kevin Durant. The first incident focused on his extended argument with LeBron James, which resulted in both players being assessed a technical foul.

The second dealt with a flagrant foul on Durant that was called against the Cavs’ Kevin Love:

The heated disputes were indicative of a game that took nearly three hours to play and saw 51 fouls called. That was actually fewer than the 53 that were whistled just two nights earlier in Game 3.

The Pachulia incident recalled a similar situation in last year’s Game 4 of the Finals, when Draymond Green attempted to punch at James’ groin after he had stepped over him. Due to the short leash that Green was already on at the time, he was suspended for Game 5, an absence that sparked the Cavaliers to a record-setting comeback, becoming the first team ever to make a Finals comeback from a 3-1 deficit.

Pachulia does have a spotty background when it comes to foul play, as it was his allegedly inadvertent stepping on the ankle of the San Antonio Spurs’ Kawhi Leonard in Game 1 of the Western Conference finals that changed the course of that series. At the time of that incident, the Spurs had a double-digit lead, but Leonard didn’t return for the rest of the series and Golden State ended up sweeping the series.

The Cavaliers and Warriors will compete in Game 5 on Monday night, with tipoff set for just after 9 p.m. ET.