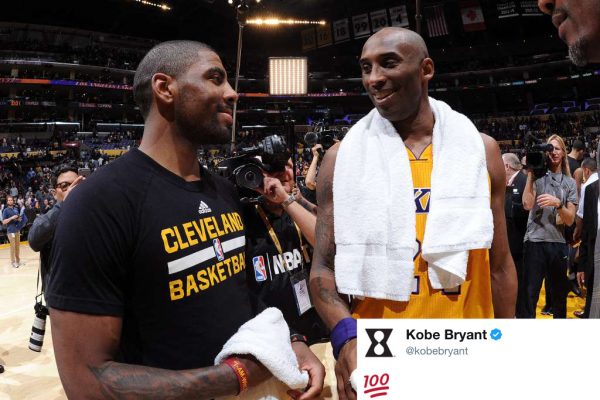 Cleveland Cavaliers point guard Kyrie Irving went off in Game 4 of the NBA Finals against the Golden State Warriors on Friday night, as he dropped a game-high 40 points on 15-of-27 shooting to go along with seven rebounds and four assists.

The Cavs now trail the Warriors 3-1, a familiar situation they were in last year, when they became the first team ever to come back from being down 3-1 in the NBA Finals to win a championship.

In addition to millions of fans watching the game all over the world, former and current NBA players were as well, and one former NBA legend in particular paid the ultimate respect to Irving after his ridiculous performance.

Kyrie got that @kobebryant mamba mentality#NBAFinals

Bryant basically retweeted a fan’s tweet, which referred to Irving’s mindset in Game 4 as “mamba mentality,” which refers to Bryant’s nickname, the “Black Mamba.”

Irving has always said that he’s looked up to Bryant as a basketball player, and it’s starting to translate on the court, as he has turned into one of the best isolation players this league has ever seen.

The point guard will look to continue his incredible streak in Game 5 at Oracle Arena on Monday night.