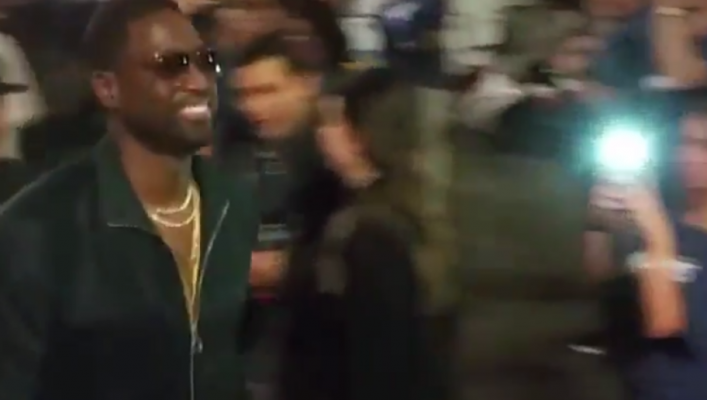 The Cleveland Cavaliers came away with an emphatic 137-116 victory over the Golden State Warriors in Game 4 of the NBA Finals on Friday night, however they still trail the series by a daunting 3-1 margin.

Seeing as how the Warriors added dynamic offensive scorer Kevin Durant last offseason, one Cavs fan thought it would be a good idea to try and recruit three-time NBA champion and now Chicago Bull Dwyane Wade after the game.

“Hey Dwyane we need you next year,” said the Cavs fan. “We need you here next year baby”

Wade was at Game 4 at Quicken Loans arena on Friday night rooting on one of his good friends in Cavs superstar LeBron James, and there have been plenty of rumors in the past about the two linking up together in the future.

Hopefully this year’s offseason doesn’t come anytime soon as the Cavs look to stave off elimination in a must-win Game 5 on Monday night at Oracle Arena.

dwyane wadefeaturedkyrie irvinglebron jamesnews ticker
← Previous Story Video: Warriors Get Away With Two Blatant Flagrant Fouls in the Second Half
Next Story → Video: Kyrie Irving Yells Something Emphatically at Dwyane Wade During Game 4