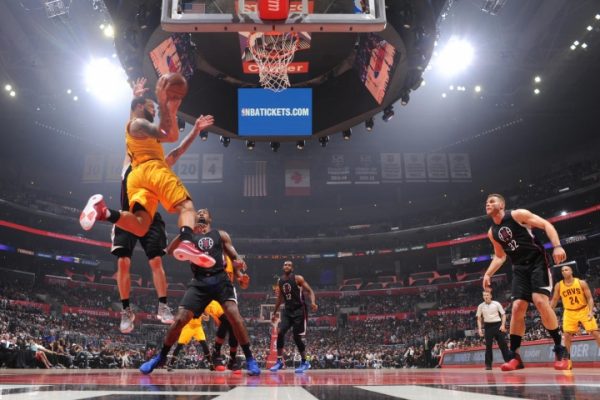 (Los Angeles, CA) – The absence of the Cleveland Cavaliers’ Big 3 and ice-cold shooting in the first half proved to be a devastating combination for the Cavaliers as they predictably dropped a 108-78 decision to the Los Angeles Clippers at Staples Center on Saturday night.

The trio of LeBron James, Kyrie Irving and Kevin Love all sat out the contest, primarily due to the fact that the Cavs have a Sunday night matchup at Staples against the Los Angeles Lakers. In addition, Irving left Thursday night’s victory over the Utah Jazz with soreness in his left knee, while Love had just returned to the lineup in that game after over a month of being out due to arthroscopic knee surgery.

During the first half, both teams struggled mightily with their outside shot, with Cleveland connecting on just 32 percent of its attempts and Los Angeles not doing much better at 36 percent. That frigid shooting was especially evident from long-range, with the Cavaliers missing all 13 of their attempts and the Clippers managing just 2-of-15 for their three-point efforts.

Prior to the game, Cavaliers head coach Tyronn Lue explained his decision about keeping James out of the contest:

“He wants to play. He was mad, but I just thought for him it was the right decision,” Lue said. “Not to go out there and try to carry the whole load by himself and playing more minutes. I just think getting those two back tomorrow and getting on the same page is good for us, instead of just trying to play him when Kevin can’t play in a back-to-back and Kyrie can’t play in the back-to-back. So it’s tricky. He’s pissed, but it’s my decision, it’s the medical staff’s decision, and that’s what we came up with.”

After one quarter, the Cavs actually had held a 16-14 lead, but in the final 5:30 of the second period, the Clippers took control of the game by putting together a 23-7 run for a 47-31 halftime advantage. Over that time, the Cavaliers missed 6-of-7 from the field.

Both teams improved their shooting in the third quarter, yet the closest the Cavs could get during the period was 10 points and the Clippers took a 76-58 lead heading into the final 12 minutes. Then, any last chance at a comeback faded when Doc Rivers’ squad ran off the first eight points to take a commanding 26-point lead. Both the 31 first-half points and 78 points for the game were season-lows.

What scoring that Cleveland did have over the course of the game was spread out evenly, with seven different players reaching double figures on the night. Richard Jefferson led the Cavs with 12 points, while the duo of Deron Williams and Tristan Thompson each added 11 and four others contributed 10 points apiece. One of those four players was Iman Shumpert, whose status was considered questionable after injuring his shoulder in that Thursday game against Utah.

As noted, the Cavaliers will stay right where they are and face the Lakers in a game that will tip off on Sunday night just after 9:30 p.m. ET.