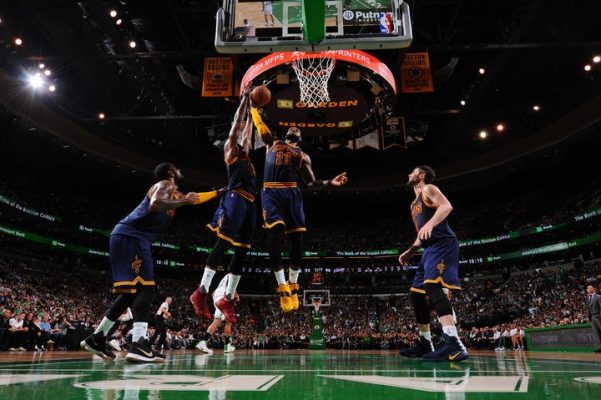 (Boston, MA) – Combining 59 percent shooting with an absolutely stifling defense during the first half helped the Cleveland Cavaliers bludgeon the Boston Celtics in a 130-86 pounding in Game 2 of the Eastern Conference Finals on Friday night. The victory now gives the Cavs a 2-0 advantage with the series now headed back to Cleveland for the next two contests.

The first quarter was simply the precursor to what became a second-period slaughter. The Cavaliers shot 60 percent from the field and held the Celtics to just 29 percent in that category. That allowed them to take a 32-18 lead after the first 12 minutes of action.

“It was a good 48-minute game for us,” Cavs head coach Tyronn Lue said. “Defensively, we started out well and that opened up the offense for us.”

The game officially became a rout as Cleveland outscored Boston 40-13 in the second quarter, taking a 72-31 halftime lead. That established a new NBA record for the largest halftime lead for a playoff game, breaking the old mark of 40 points, set by the Detroit Pistons, who led the then-Washington Bullets, 76-36, at halftime of their April 26, 1987 contest

In less than six minutes of the second period, the Cavaliers put together a 21-4 run to make it 53-22, with the Celtics unable to stem the battering as they continued to miss shots and commit turnovers. When Kevin Love connected on a 3-pointer at the top of the key a few minutes later, it gave the Cavs their first 40-point lead at 66-26. Then, with a minute to go in the half, that lead inched up a point at 70-29. After Boston had apparently gotten their deficit under 40 points, J.R. Smith capped the near-perfect half for the Cavaliers with a turnaround jumper at the buzzer.

Leading the rout was LeBron James, who finished with a game-high 30 points in 32 minutes, shooting 12-of-18 from the field. In addition, he dished out seven assists, grabbed four boards and slapped away a trio of shots.

“I’m not perfect, but I try to be as perfect as I can every night and I hope to continue that,” James said.

Kyrie Irving added 23 points and three assists, shooting 8-of-11 from the field, while Love ended his night with a double-double with 21 points and 12 rebounds. Richard Jefferson was the only other Cleveland player to score in double figures with 10 points, though Smith came close with nine points and seven rebounds.

“We’re very focused and we have a lot of confidence with this team,” Irving said. “We started out tonight being aggressive and being pissed off.”

James was the focal point on both sides of the ball during the opening half, collecting 22 points, six assists, three rebounds and those three blocked shots. One of those swats came on an Avery Bradley first-quarter shot attempt, closely resembling James’ legendary block of Golden State’s Andre Iguodala in Game 7 of last year’s NBA Finals.

“He’s (James) playing at an unbelievable level and has really been setting the tone for us,” Lue said. “When we’re blitzing, rotating, scrambling, having him on the back line helps us so much.”

Despite that praise, James was more focused on the team as a whole:

“We all push each other and are all here to sacrifice for each other. It’s great to be in a locker room like that,” James said. “Our commitment level, our sacrifice every night covers up some of the faults we have.”

The first half beatdown against a team with a history as storied as the Celtics was especially notable. The only other time that Boston trailed by 40 points or more at halftime was on Nov. 23, 1967, when the then-expansion Seattle Supersonics led Boston by 44 points.

Even with the game comfortably at hand, the Cavaliers managed to boost the margin to 49 points late in the third quarter. With 1:47 left in the third period, Lue officially emptied his bench to begin garbage time, with the Cavs taking a 103-57 advantage into that stretch. During that final quarter, the largest lead of the game reached the 50-point mark at 112-62 with 9:12 left.

The historic nature of the rout somewhat obscured another bit of history the Cavs accomplished by matching the Los Angeles Lakers for the most consecutive playoff victories at 13 games. The Lakers won their final two games of the 1987-88 season to capture the NBA title, then won their first 11 postseason games the following year.

“It was just one of those games, you can’t bank on that every night,” Lue said. “We’re going back home, but we’re not going to get comfortable. We have to get ready for Game 3.”

James mirrored Lue’s comments about not taking time to savor this victory:

“There’s no such thing as complacency in the playoffs,” James said. “We came on the road and won two games, but it means nothing if we go home and just expect to win Game 3. There are things we can do better, even with this win.”

Game 3 will take place at Quicken Loans Arena on Sunday night, with tipoff set for just after 8:30 ET. Boston needs to win at least once in the next two games to avoid becoming the third consecutive sweep during Cleveland’s playoff run.