LeBron James Responds to Being Snubbed by MVP Voters 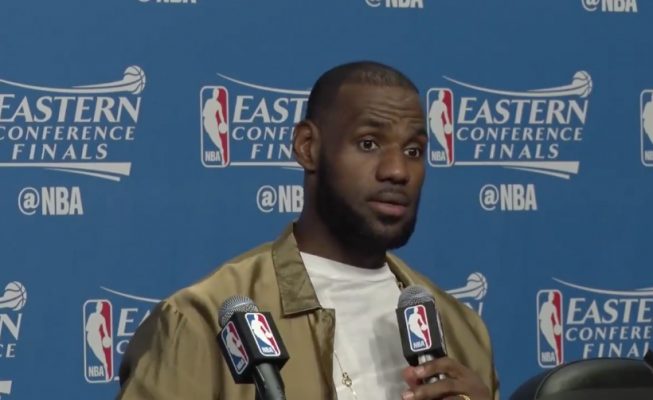 Following Friday night’s rout of the Boston Celtics, Cleveland Cavaliers forward LeBron James was informed that for the first time since 2008, he he wouldn’t be a finalist for the NBA’s Most Valuable Player award. While he publicly appeared to be diplomatic about the final results, it was clear that he wasn’t happy about being out of the running in favor of of Russell Westbrook, James Harden and Kawhi Leonard.

Prior to that remark, James indicated that he hadn’t seen the results, considering they were released less than an hour before tipoff. He then spoke about his overall importance to the team and the league itself:

“What are you going to do about it at the end of the day? My only job is to try to be the MVP for this team every night, put my teammates, put our franchise in position to be successful and ultimately compete for a championship,” James said. “For me, I know what I bring to the table. This league knows what I bring to the table. That’s for you guys to write about. It’s not for me to be concerned about.”

In addition on Thursday, the 2016-17 All-NBA team was announced, with just a single voter out of 100 not putting him on the first-team squad. Dave McMenamin of ESPN.com wrote that James was annoyed with that fact before then offering a brief comment on the MVP balloting:

“Fourth?” James said. “I haven’t been fourth in a long time.”

The snub also got the attention of Cleveland head coach Tyronn Lue, as well as a few teammates. Lue spoke about how giving James the MVP trophy every year wouldn’t be out of line, but it would be boring from a league perspective. As a comparison, he invoked the name of James’ former teammate, Shaquille O’Neal:

“Those guys had MVP seasons, and you’ve got to give the award to some different people every now and then,” Lue said. “I look at LeBron like Shaq; I think every year he’s the MVP, and you can give him the award every year if you wanted to. When guys have incredible seasons like James Harden did and Westbrook and Kawhi, then you kind of credit those guys and give those guys the nod. But to me, I mean, LeBron is MVP, just like Shaq, you can give it to him every year if you wanted to.”

“Consistency is boring, it’s not a good story,” Frye said. “I don’t know what the weatherman gets paid in Hawaii, but it’s going to be sunny today. We don’t care. I’ll be honest, I don’t know if it’s a motivating factor for him. Other than his legacy for the future. For him, what’s more important? Getting stats and winning the regular-season MVP or getting ‘chips and being considered one of the greatest.”

Richard Jefferson spoke about how the legitimacy of the awards are diminished through this type of voting:

“We can say whatever we want about the MVP, when that guy is doing that and other guys are getting the MVP based on the regular season it changes your outlook,” Jefferson said. “There was somebody who didn’t have him in the top five.”

The player that James has called his favorite teammate, James Jones, noted that the selections were based more on marketing initiatives than play on the court:

“It’s a headline,” Jones said. “Everything is a headline. It’s marketing of the game, of the award, it’s being opportunistic. That’s its classic definition, it’s opportunistic. Does it create more waves before the game or after the game? Or on off days? Intrigue starts right before tipoff, so it’s something else to talk about.

“At the end of the day, the people that matter most to him, he understands he’s our MVP. He understands that without him, this doesn’t go. He proves it every night. But once again, we’re talking about two totally different standards. You’re looking for him to do something he’s never done before, which he is and which he’s doing, but you still want to see more. At the end of the day, we say all the time: When you win, eventually it becomes moot.”

Finally, J.R. Smith raised the possibility that it wouldn’t be a surprise to see James raise his game even higher. In addition, he believes that James is driven more by championships than individual awards.

“Just another chip on his shoulder, which helps,” Smith said. “He got a vote for [All-NBA] second team. Somebody’s trippin’. … He’s driven by a completely different monster. He’s not playing for Russ or James. Like he said, he’s chasing a ghost. Right now, that’s the only thing to compare to him.”

Regardless of which player ends up being selected, none of the three players in the running will presumably be playing in this year’s NBA Finals. In contrast, James not only stands two games away from playing in the finals, but in his seventh consecutive finals. The latter statistic says it all about just how valuable a player he remains.