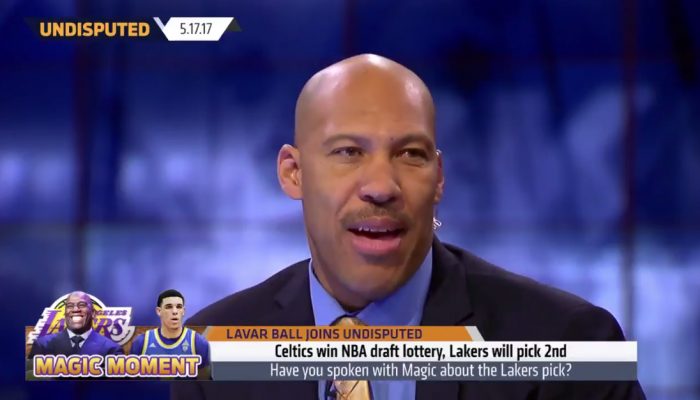 The bombastic approach taken by LaVar Ball to promote his sons has sparked plenty of controversy and criticism about his approach over the past few months. One of the more recent comments came from Cleveland Cavaliers point guard Kyrie Irving, with Ball naturally responding by taking issue with the comments.

Ball appeared on FS1’s “Undisputed” on Wednesday morning to respond to Irving, who last week compared his relationship with his own father to Ball’s relationship with his son. Saying that Ball needed to let his son Lonzo run his own life, Irving indicated that it is the right move, even if it means mistakes are going to be made. Lonzo is expected to be one of the top selections in next month’s NBA draft, much like Irving was the top pick in the 2011 draft.

LaVar Ball responded to #Cavs Kyrie Irving's comments from the Road Trippin' Podcast. Little does he know Irving actually is a father. pic.twitter.com/ON5WgSbmks

Ball didn’t immediately mention Irving by name at the outset of his criticism:

“You have some young people critiquing, ‘Oh, LaVar needs to let Lonzo go,’” Ball said. “How are you young guys going to say anything when you ain’t got no kids?”

At that point, co-host Skip Bayless interjected by mentioning Irving’s name, which immediately provoked a response from Ball:

“Kyrie, definitely. How are you gonna tell me how my son should be. You don’t have a kid.”

In reality, Irving is the father of a daughter, born in November 2015, though at this point in the conversation, the show’s other co-host, Shannon Sharpe, then attempted to explain what Irving was attempting to say. That only led to Ball making more comparisons between the two situations:

“Kyrie, he’s in a different situation. So you can’t put yourself in the same situation as Lonzo,” Ball said. “I have a wife and two other sons. You not in that situation, his was different. Now, he couldn’t wait to break away from his dad. Why? Because you guys was needy back then. My boy’s not needy, he does whatever he wants. Just like I do whatever I want.

“So you can’t put yourself in that situation and say, ‘Oh, from my experience.’ Maybe he didn’t have the relationship that me and ‘Zo got. I don’t think he did. First of all, your mom wasn’t there. Something’s got to change right there, it’s not the same.

“Lonzo can come home and see his mom and dad all the time. Most people, with his talent, usually has a single parent. Not two of them together and be involved.”

The younger Ball is likely to be the second player selected next month, being chosen by his hometown Los Angeles Lakers. That will mean Irving and Ball will face each other twice per season, with the elder Ball’s comments likely to fuel Irving’s already-ample competitive drive.