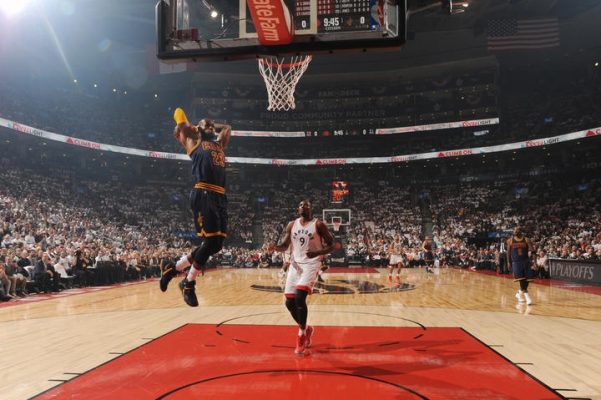 (Toronto, ON) – Kyrie Irving’s 11 consecutive points in the fourth quarter helped the Cleveland Cavaliers stop a comeback effort by the Toronto Raptors to close out a sweep of the Eastern Conference semifinals, 109-102, at Air Canada Centre on Sunday afternoon.

The Cavaliers were trailing 93-92 with 6:38 left in the game when Irving began his push. He hit a 3-pointer at the 6:15 mark, then added a pair of layups and four free throws to make it 103-95 in Cleveland’s favor with exactly four minutes left. A little more than a minute later, LeBron James connected on a 3-pointer of his own to make it 106-95 and effectively put the game away.

“It’s winning time, just understanding the magnitude of the game and what was at stake,” Irving said. “We understand that it’s never easy. We have a veteran team and we’ve seen a lot. Coming into games like this, we understand how important it is to win and get some rest.”

The clutch performance by Irving, who finished with 27 points and nine assists, helped the Cavs avoid a collapse.

“I thought he (Irving) did a good job of taking what the defense was giving him,” Cleveland head coach Tyronn Lue said. “I need him to be aggressive and in the fourth quarter, we went to an iso one-on-one game and he produced for us.”

James led the Cavaliers with 34 points, adding nine rebounds and six assists, while Kyle Korver added 18 including four 3-pointers. Rounding out the double-digit scorers was Channing Frye, who finished with 10 points.

“There are some things we can clean up,” James said. “We have another level and we believe we can reach it.”

The Raptors were once again forced to play without starting point guard Kyle Lowry, who sat out his second consecutive game with a sprained ankle.

For the first nine-plus minutes of the game, the Raptors were in control, taking multiple 11-point leads. One of the key reasons for this surge was Toronto hitting 10-of-16 from the field to start the game, compared to Cleveland’s 4-for-14 performance at the outset. However, in the final 2:30 of the period, the Cavs went on a 13-2 run to knot the score at 28 apiece.

Korver then came off the bench and gave the Cavaliers a needed jolt by hitting on 6-of-8 from the field, which included four triples. That injection of offense boosted Cleveland’s lead to 61-47, with Toronto chipping two points off that deficit by the time the halftime horn had sounded. During the period, the Cavs managed to collect 10 assists on their 12 field goals.

“I got some wide-open looks and guys were finding me on the corners,” Korver said. “We didn’t play perfect, but we got the job done.”

During the first six minutes of the third quarter, the Cavaliers had essentially traded baskets with the Raptors and had held a 74-60 lead at the midway point. From there, Toronto went on a 12-2 run to slice the margin to just four points, and finished the period trailing by five at 85-80. That push continued until their brief lead sparked Irving’s eruption.

“He’s (Irving) battle-tested and has that championship DNA,” James said. “It doesn’t matter how he’s doing in the first three quarters, he’s able to hit that switch. It’s a plus when you have guys that can close out games . We needed that spark.”

Irving referenced his nine assists when speaking about his overall growth as a player:

“My effect on the game doesn’t have to be based on shooting,” Irving said. “There are so many difference facets of the game, like on the defensive end and sacrificing yourself to give teammates better shots.”

The sweep gives the Cavs the opportunity to rest up for the Eastern Conference Finals against either the Washington Wizards or Boston Celtics.

“We knew once we got healthy, got our rotations set and our defensive schemes in place, we could go on runs like this,” Lue said. “When we’re playing with pace, we’re pretty dangerous.”