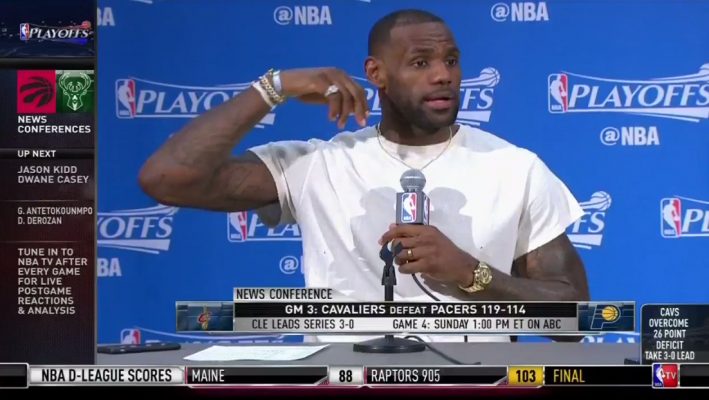 The epic comeback forged by the Cleveland Cavaliers on Thursday night against the Indiana Pacers was largely due to the efforts of LeBron James, who managed to collect the 17th postseason triple-double of his legendary career.

Following the game, James was asked by a reporter to assess the historic nature of the contest and his role in it, which marked the largest halftime comeback in NBA playoff history.

“I just try to put myself in a position to help my teammates win.” –@KingJames #NBAPlayoffs pic.twitter.com/JMrpZmtqCU

“For myself, I just don’t settle for being as great as I can be. It’s not going to result in a stat line like this every night. Where my mind is and when it’s fresh and in the moment, then certain things like this happen. I don’t know, I can’t even appreciate it. I’ll let you guys kind of write your words about it and go from there, but the only thing that matters is a win and that’s what I’m here for.”

James ended the night by scoring 41 points, 13 rebounds and 12 assists. In addition, his performance moved him into third place in career playoff scoring, ahead of Kobe Bryant.

The Cavaliers will seek to close out a sweep of the Pacers on Sunday afternoon at Bankers Life Fieldhouse. Tipoff will be just after 1 p.m. ET.