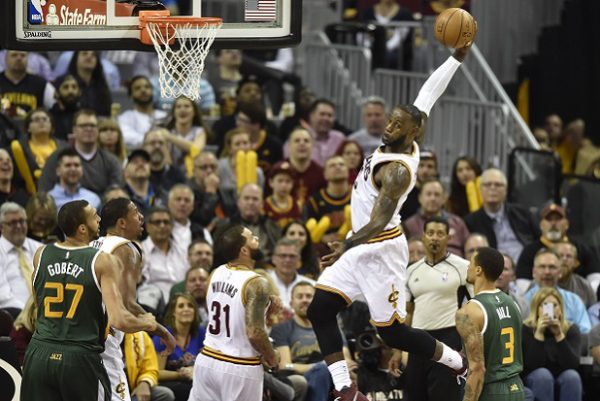 The Cleveland Cavaliers have been sizzling from beyond the arc this season. The Cavs join the Houston Rockets, San Antonio Spurs and Golden State Warriors as the franchises known for taking and making the most threes in the association, the difference, however, is that the Cavaliers can boast the NBA record for playoff and regular season 3-pointers made in a single game.

Funnily enough, the Cavs set both records against the Atlanta Hawks. In last year’s playoffs, the Cavs nailed 25 3-pointers at home against them in the second round, and just last month, the Cavs put the Hawks to the sword again, setting an NBA regular-season record of 25 made 3-pointers in a game in Atlanta, going berserk from the perimeter.

Now, the Cavs have broken another three-point shooting record – the most made threes in a single season in franchise history. As Channing Frye gave an extra pass to J.R. Smith in the corner late in the first quarter of Cleveland’s matchup against the Jazz, Smith drained a trey to set a new franchise record for the Wine and Gold, overtaking the 880 3-pointers they had made last season.

With @TheRealJRSmith's corner triple, @cavs set new franchise record for most 3's in a season#CavsJazz is on FSO: https://t.co/6regSHzx5w pic.twitter.com/CoiQgthWvP

The Cavs were made to work on the night, as they defeated a very stubborn and well-drilled defensive team in the Jazz. In addition, the Cavs sunk a total of nine long balls on the evening and moved into fifth for most 3-pointers made in a single season in NBA history.

Cavaliers broke their team record for 3-pointers in a season.

5th-most in season in NBA history

The Cavaliers still have 15 games remaining in the regular season, and are certain to significantly add to their franchise record before the playoffs begin. With the return of Smith and Kevin Love suiting up for the first time since knee surgery last night, the three-point options have only increased, and this will only aid their attempts at excellence from beyond the arc.

Look for the Cavs to continue to create open looks and cash in from the outside, as they aim to finish the season strong and cement the No. 1 seed in the Eastern Conference.