Cleveland Cavaliers vs. Indiana Pacers Game 3 Recap: A Comeback for the Ages 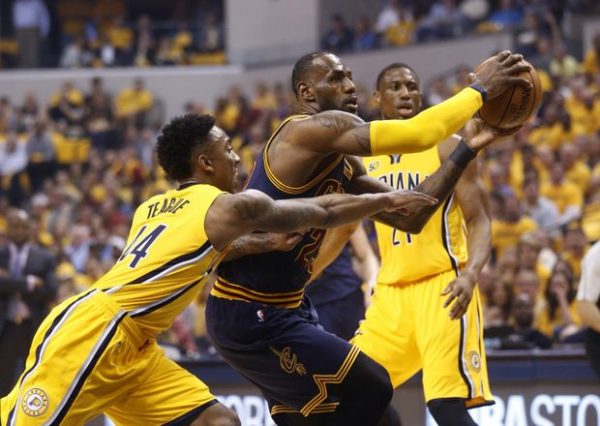 (Indianapolis, IN) – Fueled by 41 points from LeBron James and putting together a tremendous second-half comeback by employing shutdown defense, the Cleveland Cavaliers roared back from a 25-point halftime deficit to stun the Indiana Pacers with a 119-114 victory on Thursday night at Bankers Life Fieldhouse. The win now gives Cleveland a commanding 3-0 lead in the best-of-seven series.

The Cavs’ comeback marked the largest halftime comeback in NBA playoff history after trailing by 25 points at halftime. The 3-pointer was Cleveland’s weapon of choice during the surge. The team ended the night with 21 long-range bombs — 12 of those coming in the second half.

Yet defense tells the true story as the Cavaliers limited the Pacers to just 40 points in the final two quarters after giving up 74 during the opening two periods. The Cavs held the Pacers to 25 percent shooting from the field in the second half, including 19 percent (5-of-26) in the third quarter, while also hitting seven 3-pointers to reduce the deficit down to five points before the Pacers ended the period with a 91-84 lead.

“The best way to get offense is to play defense, and in the third quarter, that allowed us to get back into the game.” James said. “We just needed to get some stops and we got some momentum.”

That comeback was forged in two parts. The first got the margin down to 14, only to see Indiana hit a pair of 3-pointers to push its lead back up to 20 points at 87-67. Over the final 4:37 of the quarter, Cleveland put together a 17-4 run. Then, in the fourth quarter, a trio of free throws from Channing Frye with 8:59 to go got the deficit down to two and James followed with two rousing dunks in the span of 32 seconds, as the Cavs took a two-point lead at 100-98 with 6:27 to play.

The Cavs would take the lead for good with 4:54 left on a James layup, though the backbreaker proved to be a 3-pointer from Frye with 54 seconds left that gave them a 114-107 lead. In those final 12 minutes, the Pacers managed to hit just 32 percent of their shots from the field.

“I kept telling the guys, let’s do something special, we need some next level stuff,” Frye said immediately after the game. “In the second half, I just said, ‘Screw it,’ and let it fly. I’ve hit game-winners here before, I like that side of the court.”

In the excitement over the comeback, James quietly added another triple-double to his legacy, grabbing 13 rebounds and dishing out 12 assists to go along with his 41 points. He also bypassed Kobe Bryant on the NBA’s all-time playoff scoring list. Four other players: J.R. Smith, Frye, Kyrie Irving and Kevin Love each scored 13 points, while Kyle Korver tossed in 12 points. On the glass, Tristan Thompson collected 10 rebounds.

“In the second half, we made some adjustments and kept fighting,” Cavaliers head coach Tyronn Lue said. “Give credit to our guys, it was a total team effort. It took us two quarters, but we never lost our composure and stuck to the game plan.”

During the first quarter, the Pacers shot 67 percent from the field, compared to just 40 percent for the Cavaliers. However, it was during the 3:12 mark of the period that the Cavs’ defense began to fall apart, being on the wrong end of an 18-8 run that gave the Pacers a 37-27 advantage when the quarter had ended.

“They jumped all over us,” James said. “We knew we had to take a punch from them, but they gave us a flurry.”

Cleveland’s outside shooting got worse in the second quarter, connecting on just 33 percent of its shots. That resulted in Indiana blowing the game open and heading into halftime with a 74-49 lead.

“They gave us their best shot in the first half and we had to come back with a haymaker,” Love said. “We knew if we chipped away and set the pace, we could do it.”

The Cavaliers will look to close things out in Game 4 as the game tips off on Sunday afternoon just after 1 p.m. ET. That game will also be on the Pacers’ home court, with a potential Game 5 set for next Tuesday night at Quicken Loans Arena.

“I just thought we were too cool, too laid back,” Lue said. “We had to put on our hard hats and came out with a greater sense of urgency.”