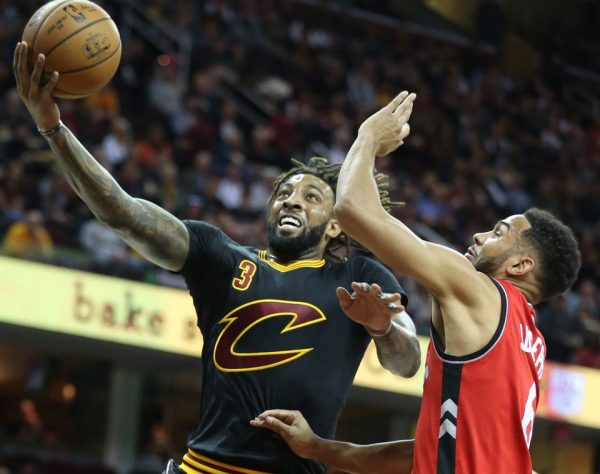 (Cleveland, OH) – With most of their top players sitting the game out, the Cleveland Cavaliers closed out the 2016-17 regular season by losing a 98-83 decision to the Toronto Raptors in Wednesday night action at Quicken Loans Arena.

The Cavaliers chose to sit LeBron James, Kevin Love and Kyrie Irving in order to rest them for the start of the postseason this weekend. The loss was the fourth straight for the team, giving them a final regular season mark of 51-31.

“The most gratifying thing to me is that we got out of the season healthy,” Cleveland head coach Tyronn Lue said. “I think we’ve got a good run in us.”

During the first quarter, the two teams traded baskets for much of the period, with Cleveland taking its last lead with just under three minutes left. In what would serve as a precursor for a second-quarter disaster, Toronto scored nine of the final 12 points to end the period with a 26-21 lead.

In the final 7:47 of the half, the Raptors took control of the game with a 21-5 run that sent them into the halftime locker room with a 53-34 lead. The chief reason for that surge was the frigid shooting that saw the Cavs hit just 24 percent of their shots from the field during those 12 minutes. Those shooting issues were especially pronounced in the final six minutes, with the Cavaliers making just 1-of-8 from the field and missing their last six attempts.

Little changed during the second half with the Cavaliers unable to get their deficit below double digits the rest of the way. One of the few bright spots was that no Cavs player suffered any injuries, a season-long issue that doesn’t appear to be an concern with the playoffs set to begin.

Iman Shumpert led the Cavaliers with 11 points, one of four players to score in double figures. The other three members of that quartet were Tristan Thompson, Deron Williams and Derrick Williams. Thompson made his first appearance on the court after missing the past four games with a thumb injury.

“I felt good. It’s good to be back out there,” Thompson said. “Now we can focus on one team and we have guys that know what to look for to get the job done.”

With little at stake, Cleveland was able to play its two newest additions to the roster, guard Dahntay Jones and center Edy Tavares for a good portion of the second half. Jones ended his 12 minutes with nine points, two rebounds and an assist, while Tavares played 24 minutes, scoring six points, grabbing 10 rebounds and swatting away six shots.

“Dahntay gives us positive energy off the bench and keeps guys pumped up. He’s good to have around the team,” Lue said about Jones, and then added about Tavares, “He had the most blocks in a game for the Cavs in 10 years and he showed good stamina.”

Tavares spoke about being able to play together with both James and Irving:

“It was a shock to me because they’re my favorite players,” Tavares said. “When I saw LeBron, it was like a movie. It wasn’t real to me.”

The Cavaliers will begin the postseason at home on Saturday afternoon against the Indiana Pacers, who defeated the Atlanta Hawks to clinch the seventh seed. Tipoff for that contest will be just after 3 p.m.

“They’re well-coached and they’re playing well,” Lue said of Indiana. “We have to be prepared for them.”