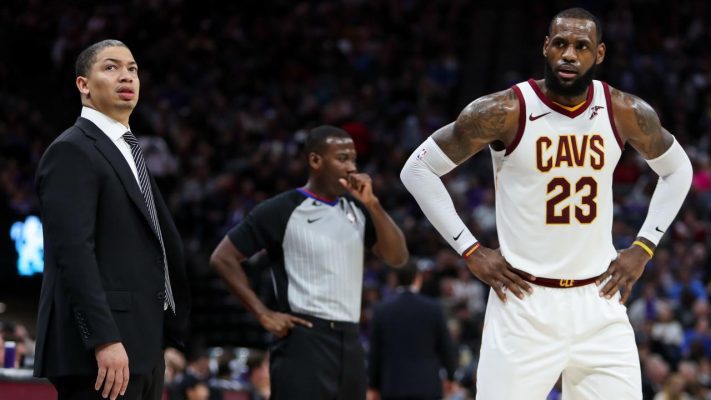 Early Monday morning, it was announced that Cleveland Cavaliers head coach Tyronn Lue is momentarily stepping away from his position due to health reasons.

Shortly after, LeBron James reacted to the announcement, comparing the loss of his head coach to the loss a star player:

“It’s like losing one of your best players,” James said at shootaround on Monday. “He’s the guy that’s pretty much the captain of our ship and has run the thing for the last three years.

But his health is most important, and we look forward to when he comes back.”

Lue announced the decision in a statement released by the team on Monday:

“After many conversations with our doctors and Koby [Altman] and much thought given to what is best for the team and my health, I need to step back from coaching for the time being and focus on trying to establish a stronger and healthier foundation from which to coach for the rest of the season.”

Lue has had to miss part or all of three previous games this season because of his health. Most recently, Lue was forced to leave in the middle of Saturday’s win over the Chicago Bulls.

The veteran head coach gave insight into his health complications, but admitted that the underlying issue has yet to be discovered. Despite that, he expressed his hope to return as soon as possible:

“I have had chest pains and other troubling symptoms, compounded by a loss of sleep, throughout the year,” he said. “Despite a battery of tests, there have been no conclusions as to what the exact issue is.

While I have tried to work through it, the last thing I want is for it to affect the team. I am going to use this time to focus on a prescribed routine and medication, which has previously been difficult to start in the midst of a season. My goal is to come out of it a stronger and healthier version of myself so I can continue to lead this team to the Championship we are all working towards.”

While there is no question that his health takes precedence, the timing for Lue’s departure couldn’t come at a worse time. The Cavs have struggled on the court as of late and are already dealing with a plethora of injuries to their roster. With just 13 games left on the schedule, interim head coach Larry Drew will look to lead the Cavs to a strong finish on the season to hold onto their current third seed in the Eastern Conference.

Hopefully, James and company are able to hold on without the presence of their head coach. There is no guarantee that Lue will be back by the time the playoffs come around, but his return would certainly give Cleveland an added boost as it looks to embark on another postseason run.