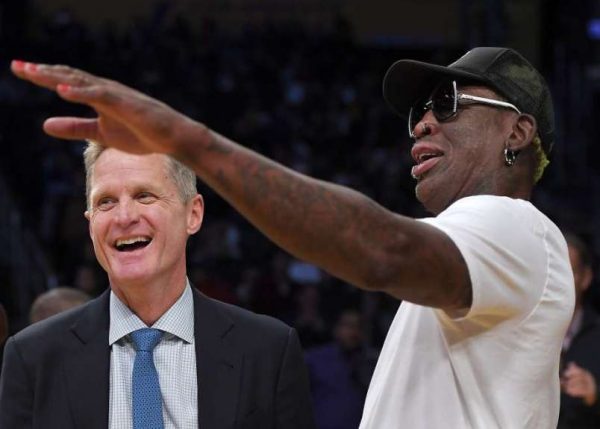 NBA Hall of Famer Dennis Rodman’s criticism earlier this week of Cleveland Cavaliers forward LeBron James taking games off in order to rest caught the attention of one of Rodman’s former Chicago Bulls teammates: current Golden State head coach Steve Kerr. The response of Kerr offered a blunt and amusing retort that took a jab at Rodman’s inability to stay out of trouble.

Anthony Slater of the San Jose Mercury News tweeted out a video of Kerr’s remarks when the coach was asked about sitting out during his playing career. These comments came prior to the Warriors’ Wednesday night road game against the Phoenix Suns.

Steve Kerr saw Rodman complaining about NBA players resting: "I got a good kick out of that…Dennis was suspended 15 games a year anyway." pic.twitter.com/9lKzZ7OMRy

“I saw Dennis Rodman was complaining about it,” Kerr said. “I got a kick out of that because Dennis was suspended for 15 games a year anyway. He’d have plenty of rest. (Went to) Vegas or Wrestlemania. He took a night off whenever he wanted so he can’t complain.”

Kerr noted that the practice of sitting players didn’t happen often when he played for the Bulls, though it did occur occasionally at the end of the regular season.