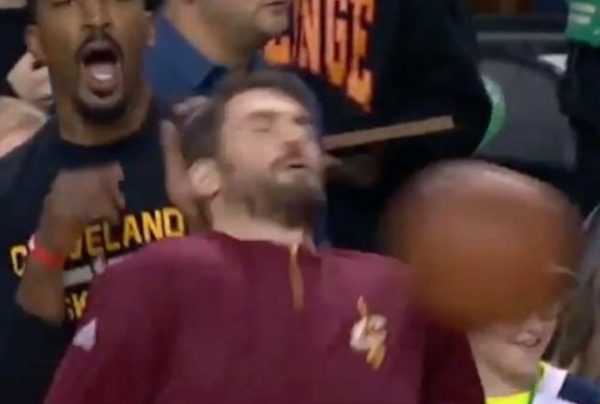 The Cleveland Cavaliers and Boston Celtics geared up tonight at TD Garden for a blockbuster contest in a battle of the two best teams in the Eastern Conference. Both teams are fighting for the No.1 overall seed, and the Celtics crowd was ready to explode before tipoff. However before the game had even started, a hilarious incident happened to Cavaliers forward Kevin Love.

During warmups, Love was unfortunately the victim of a ricocheted ball, which caught him by surprise. Love joins fellow teammate LeBron James as players who have tasted the ball right before tipoff.

It may have knocked him back, but Love did a great job of not letting it throw him off his game. He started the game brilliantly for the Wine and Gold in an aggressive first half that saw him register eight points and pull down 11 rebounds.