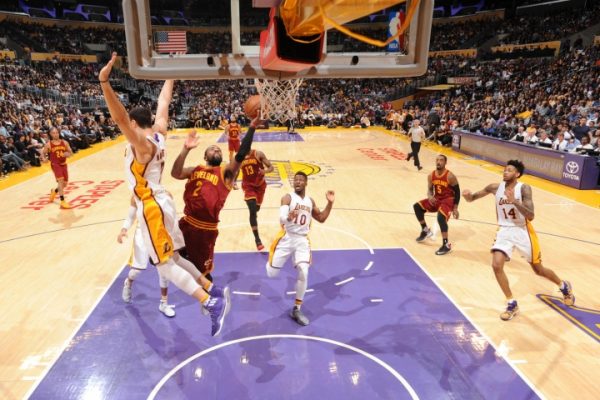 (Los Angeles, CA) – Coming back from a double-digit deficit at the start of the fourth quarter, the Cleveland Cavaliers needed all of the combined 101 points supplied by Kyrie Irving, LeBron James and Kevin Love to emerge with a hard-fought 125-120 victory over the Los Angeles Lakers at Staples Center on Sunday night.

Irving finished with a game-high 46 points, including 14 in the final quarter, while hitting 15-of-21 from the field. James scored 32, dished out seven assists and grabbed six boards. Meanwhile, Love picked up a double-double with 21 points and 15 rebounds. Not surprisingly, the performances set a new Cavaliers record of scoring from a trio.

“It’s great. I’m just staying aggressive, getting to my spots, making sure I’ve got my legs under me,” Irving said. “Just trying to make plays not only for myself, but my teammates, staying in the mindset no matter what. Despite what the score is, keep attacking, keep attacking. I feel when I’m at the pace, it goes well for my teammates.”

The Cavaliers had trailed 92-82 to start the fourth quarter and by a 94-83 score with 11:39 left. At that point, the gravity of the situation kicked in for the Cavs as they went on a 21-10 run to tie the game at 104 with 5:06 left. Then, after Los Angeles took its final lead 18 seconds later, Cleveland answered with nine unanswered points to take control of the game for good.

“I was proud of the fact that we didn’t hang our heads when we got down and that’s when we started to compete,” Cavs head coach Tyronn Lue said.

The massive output comes just one night after the trio sat out the loss against the Los Angeles Clippers on the same court. That decision sparked an outcry from all parts of the basketball world, including a phone call from the NBA league office to general manager David Griffin. However, the collective performance seemed to be an endorsement of the team’s decision.

“We got some stops and kept our composure, which is part of our championship DNA,” James said. “We also put the ball in Kyrie’s hands and he hit big shot after big shot.”

The Cavaliers had trouble all night defending against the Lakers’ D’Angelo Russell, who finished the night with 40 points. While the Cavs held him to three points during the final quarter, another area where they struggled was in the paint, with Los Angeles getting plenty of easy baskets in that area.

“He had an awesome night, but we made it easy for him,” Lue said.

With the exception of Russell, the Cavaliers held the Lakers to 25 percent shooting from the field during the opening quarter. The problem was that Russell was 6-for-8 from the field, including 4-of-5 from long-range, which helped him contribute 18 points during the period.

“This was tough because they were playing with free money tonight,” Irving said. “We had to show discipline and professionalism to get the job done.”

On a down note, Tristan Thompson was forced from the game with 3:15 left in the third quarter after taking an elbow to his teeth from the Lakers’ Julius Randle, who was assessed a technical for the hit.

“God bless my mouth guard. The team doctor numbed up the two front teeth and put them back in place,” Thompson said. “Then, he put in some old school braces that’ll be in there for a few weeks.”

The Cavaliers will now have a few days off before facing the Denver Nuggets on Wednesday night in the third of four road games on their current trip. That contest will get underway shortly after 9 p.m. ET.

“We messed with the game and we know we can turn it up, but sometimes, it’s too late,” Lue said. “It wasn’t nice to look at, but I was just happy to get out here with a win.”