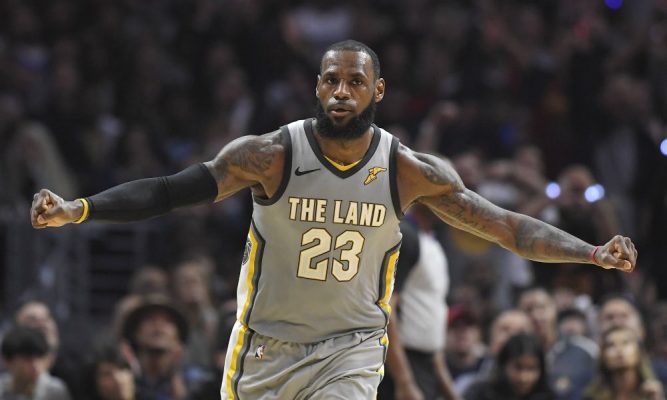 LeBron James is one of the wealthiest athletes in all of sports but he doesn’t own the richest contract in his sport. That distinction belongs to Stephen Curry of the Golden State Warriors who signed a five-year, $201 million extension in 2017.

However, James can top that deal by a few million dollars on one condition—he has to stay with the Cleveland Cavaliers.

ESPN anchor John Buccigross posted on Twitter how much James can potentially receive if he re-signs with the Cavs and what offer he can receive if he joins another team.

The Cavs will be able to offer LeBron James a projected max contract of 5 years, $205M this summer; all other teams can offer 4 years, $152M. Cavs at Lakers 9pm tonight on @espn pic.twitter.com/C0X1h1nOMm

The four-time MVP is expected to opt out of the three-year contract worth $100 million that he signed in 2016 and become a free agent this summer. When this happens, James will not only be entertaining an offer from the Cavs, but from the Philadelphia 76ers, Los Angeles Lakers, and quite possibly the Houston Rockets as well.

Signing with another team will cost James $53 million, but the prospect of winning another championship with a third team may be a tempting offer for him. He led the Miami Heat to back-to-back championships in 2012 and 2013 while giving the Cavaliers their first title in 2016.

He told Cleveland.com’s Joe Vardon back in December that he wanted to break the mold for players like him.

“I want to kind of try to break the mold just for the next generation, just take the narrative out of, ‘You’re past your prime when you hit 31,’ or ‘You’re past your prime in your 12th year in the league,’ or whatever the case may be,” James said. “Hopefully I can break the mold so when the next guy comes, he can still get $200 or $300 million and be 33 years old. I’m serious.”

If he re-signs with the Cavs this summer for $205 million, James will be the wealthiest 33-year old athlete in the world.