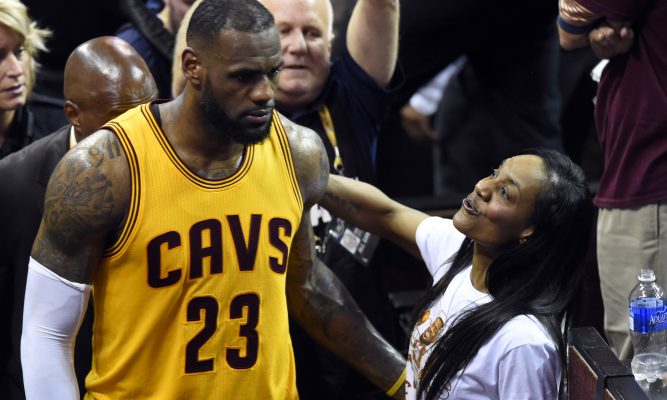 The upbringing of Cleveland Cavaliers forward LeBron James has been one that’s seen him start out at the lowest rungs of society and reach the pinnacle of his profession, which happens to be playing professional basketball. James gave some insight into those early years in Akron, which showed how he developed such a strong bond with his mother, Gloria James.

James appeared on the “Road Trippin’” podcast that’s part of his Uninterrupted network. Speaking to the show’s co-hosts Richard Jefferson and Channing Frye, James provided one anecdote about his experiences in fourth grade. That was a year in which his chaotic circumstances caused him to miss 82 days of school.

“Me and my mom went to school one day in the spring time, and my teacher was like, ‘Your son applies himself so much when he’s here, but he’s never here.’ So my mom said, ‘What can we do so my son doesn’t fail? I don’t want my son to feel like he’s a failure.’

“My teacher at the time, I’m sorry I don’t remember your name, she gave us a stack, and I wish the listeners could see the stack of papers (Richard Jefferson says he’s holding his hand about a foot high), she said, ‘If your son can finish this stack of extra credit, we’ll pass him.’

“This how G my momma is. Me and my momma went home, split the extra credit papers. She did half and I did half. We turned that s— in, and they passed me. That’s why my momma a G to this day.

The following year, James stayed with another Akron family, the Walkers, which helped stabilize his life and began to put his athletic prowess on display. His efforts in his first six games of little league football saw him reach the end zone 18 times, helping lead his team to the Akron city title.

That stability also resonated in the classroom, with James achieving a perfect attendance record as a fifth grader. Still, James knows that sports served as his lifeline and set him on the course to where he is today:

“I was doing things that I look back on like there’s no way you should’ve made it out, but the word sport saved my damn life,” James said. “It saved my life.”