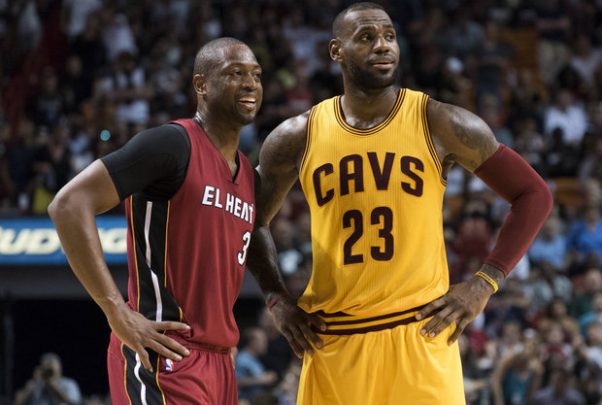 With both the Cleveland Cavaliers and Miami Heat holding 1-0 records in their respective Eastern Conference semifinal series, the Cavs’ LeBron James said after Wednesday’s shootaround that he’s always wanted to face one of the Heat’s main weapons, Dwyane Wade, who also happens to be one of his closest friends.

James has played for both teams, including a four-year stint with Miami from 2010-14, where the franchise won two NBA titles and reached the finals during the other two seasons. Asked a general question about whether he’s thought about potentially facing the Heat, James didn’t attempt to dispute that concept.

“Naturally, of course. That’s since I’ve came back,” James said. “It’d be great to play against those guys in the postseason.”

The two were connected long before James’ arrival in Miami, with both being selected near the top of the 2003 NBA Draft. James was the top overall selection by the Cavaliers while Wade was taken by the Heat four spots later.

However, since James’ return two years ago, Cleveland has been unable to win at Miami. That’s led some people to criticize his motivation due to his close relationship with Wade, speculation that gained traction in March following a 122-101 loss.

At halftime of that contest, the Cavaliers trailed by double-digits, yet James was seen joking with Wade during warmups prior to the start of the third quarter. That led Cavs head coach Tyronn Lue to speak to James about the negative perception that image had with his teammates.

Despite that controversy, James says he’s poised to put forth his best effort should the two teams end up meeting in the Eastern Conference finals.

“Anytime one of my best friends is able to go out there and perform the way he performs, it’s definitely motivating,” James said. “I was looking forward to Game 1 (against Toronto) after watching him in Game 6 (against Charlotte), you know, the way he was able to close that game out.”