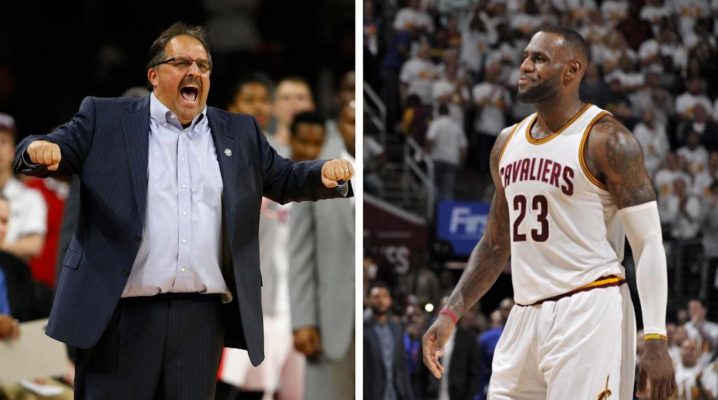 Detroit Pistons head coach Stan Van Gundy made such a statement after seeing his team hold on Thursday night for a 106-101 victory over the Cavaliers. During the course of the contest, James scored 29 points, grabbed 13 rebounds and handed out 10 assists. That triple-double marked the 50th time in his 14-year career that the future Hall of Famer had accomplished that feat.

“He’s a guy who puts pressure on the defense and makes the right play. If he gets to the rim he finishes, if he’s got an open shot he takes it, if you come he makes a pass. I mean, he’s the consummate professional basketball player,” Van Gundy said. “You can make a very, very, very strong argument that he’s the best that’s ever played this game.”

Van Gundy noted one amazing stat that shows the importance of having James on the Cavaliers:

“In the 39 minutes he plays, they’re plus-18 with him on the floor, which means in the nine minutes he was on the bench – only nine minutes – we outscored them by 23. I don’t know if that’s good or bad or what, but that’s what happened.”

Defending James remains a challenge for any team, which Van Gundy noted with his own squad:

“I mean, the guy’s incredible. He’s just a great, great, great player. Look, you play him the best you can and hopefully we’ll do a better job going forward. I thought we were really late helping, I didn’t think we anticipated our helps very well and then I don’t think that we challenged him at the rim very well. But he’s a fabulous player.”

James’ ability to drive to the basket, which on Thursday resulted in a number of eye-opening dunks, also had Van Gundy in awe of his talents:

“How about the one late in the game? He carried two guys to the rim with him.”

Van Gundy conceded that focusing on simply trying to stop James from scoring is a waste of time:

“Nah, you know what, I wouldn’t say that. Again, 10 assists today, and there’s a lot of times he’s more dangerous as a passer than as a scorer,” said Van Gundy. “You’re picking your poison with him.”

The next time that Van Gundy has to strategize against James will be on Tuesday night, when the Pistons come to Quicken Loans Arena for their final regular season game against James and the Cavaliers this season. The potential still exists that the two teams could meet in the upcoming NBA playoffs, following in the footsteps of last season’s hard-fought 4-0 sweep in the opening round by the Cavs.