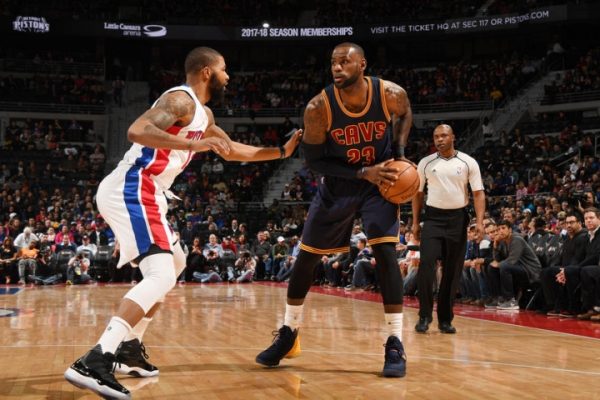 (Detroit, MI) – The Cleveland Cavaliers went cold to start the fourth quarter and that icy run proved to be deadly as they dropped a 106-101 decision to the Detroit Pistons at The Palace of Auburn Hills on Thursday night. The loss extended the Cavs’ losing streak to three games and wasted another triple-double performance from LeBron James.

That frigid stretch was aggravated by the Pistons as they hit 10 of their first 13 shots from the field to start the quarter. Detroit put together a 23-7 surge that had begun with 13 unanswered points to start the fourth period, which turned an 80-73 deficit into a 96-87 Detroit advantage.

The duo of James and Kyrie Irving combined for 56 points on the night, with James also hauling down 13 rebounds and dishing out 10 assists to reach a milestone with the 50th triple-double of his stellar career. A number of James’ baskets were punctuated with thundering dunks, including one that resulted in officials calling a technical foul on him during the first quarter.

“I think tonight, it was the beginning or end of quarters that was our problem,” James said. “It was a game of runs and we have to figure it out. We have to be more detailed and execute the game plan.”

Irving added five rebounds of his own and three assists, with Channing Frye the only other Cavalier player to reach double figures in scoring. Frye finished with 15 points, all coming on three-point attempts, and nearly picked up a double-double with nine boards.

“They hit shots and got into a rhythm,” Frye said. “We have to look inside ourselves and have to challenge each other to do our best. We have to be aggressive on the defensive end and communicate with each other.”

The Cavaliers had nearly watched the game slip away one quarter earlier as the Pistons took a 68-58 lead with just over seven minutes left in the third period. The momentum changed quickly when a James basket was followed by a trio of Channing Frye 3-pointers that came in the rapid-fire span of just 58 seconds. That was part of a 23-5 run by the Cavs over the remainder of the period, capped by a dunk from James and then one more 3-pointer from Frye to give Cleveland an 80-73 lead.

“We got up early, struggled defensively in the second, came back in the third quarter, then struggled again on defense in the fourth,” Cavs head coach Tyronn Lue said. “We’ve got to do a better job of cleaning that up.”

A nearly six-minute run in the first quarter turned a 10-7 Cavs deficit into a 27-12 lead. However, in the final 1:55 of the period, the Pistons scored 10 of the final 12 points to slice the margin to just seven at 29-22. Both teams then battled back and forth during the second quarter. However, like the opening period, Detroit closed strong with ten unanswered points to hold a 55-52 lead at intermission.

“A lot of our problems had to do with the mistakes we made,” Irving said. “In order for us to be great, we have to do things across the board.”

J.R. Smith made his long-awaited return to the court from a fractured thumb suffered nearly three months ago, playing minutes in a reserve capacity. The problem was that the long layoff meant that he had plenty of rust attached to his shot. After missing his first two jumpers, he connected on a 3-pointer from the right corner with just over two minutes left in the first half, though that would be the extent of his scoring contributions on the night. Smith finished with a rough 1-for-9 shooting effort from the field.

“You can’t expect to come out and play great your first game back,” Lue said. “He just has to be better defensively, do what we ask and his shot will come.”

Part two of the Cavaliers’ three-game road trip will take place on Saturday night when they head to Orlando to face the Magic in a game that will tip off just after 7 p.m. ET.