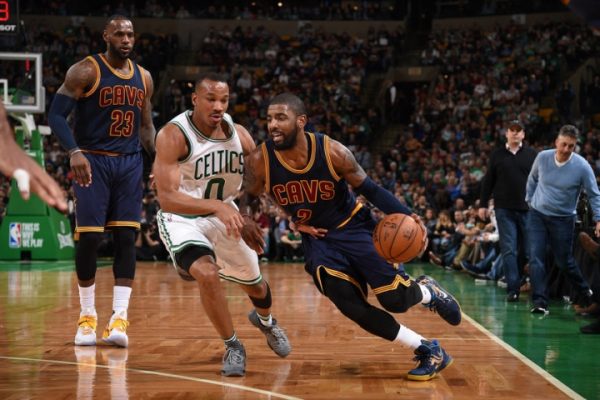 (Boston, MA) – Despite 28 points each from LeBron James and Kyrie Irving, the Cleveland Cavaliers fell to the Boston Celtics in a tight 103-99 loss at TD Garden on Wednesday night. James’ performance marked the 49th career triple-double of his career and seventh on the season.

During the final two minutes of the contest, a trio of 3-pointers and some clutch free throws proved to be the difference makers for the Celtics. The latter two 3-pointers were sandwiched around a Kyle Korver triple with 57.5 seconds left, which was the last time Cavaliers had a lead at 97-96.

After Boston’s Isaiah Thomas drilled a 3-pointer with 49.4 seconds remaining to make it 99-97, Irving tied it up with a layup with 38.9 seconds to go. After two free throws from Thomas with 28.1 seconds left again gave the Celtics the lead, the newest member of the Cavs, Deron Williams, put up a 3-point attempt with 5.9 seconds left to try and take the lead. However, it was off and Jae Crowder put the game away with two final free throws.

“I saw D. Will naked in the corner. He just missed it,” James said, describing his pass to Williams in the left corner that came up short. “It was a great first game for him, especially since he hasn’t played for two weeks.”

Williams had confidence in the shot, and feels that better success will occur in the months ahead:

“I thought it was good. It felt good, looked good,” Williams said. “I’ll get a lot of them in the future.”

The Celtics’ late prowess from long-range was in stark contrast to their effort in that category during the first half, when they managed to hit just 2-of-13 in that department.

James ended the night with 28 points, 13 rebounds and 10 assists, while Irving’s 28 points were supplemented by a pair of rebounds. The only other player to score in double figures for Cleveland was Derrick Williams, who ended his evening with 13 points. On the glass, Tristan Thompson hauled down 13 boards.

“I like what I saw. We battled, it was a good game that went down to the wire,” Cavaliers head coach Tyronn Lue said. “We competed. That’s all you can ask for.”

Lue wasted little time in using Deron Williams after Irving had picked two fouls in just over eight minutes of action. Williams entered the game with 3:51 left in the first quarter and fed James for his first assist at the 2:44 mark.

“Getting those two fouls was tough, but you have to stay aggressive,” Irving said. “You learn what you can from this game and you move on.”

Deron Williams also added another assist before the period ended, though not before he had connected on a jumper with one minute left for his first points in a Cleveland uniform. Though he added only two more points on the night, his 23 minutes on the court allowed Irving to limit his play to 32 minutes.

“We just want to get him adjusted as fast as we can, just let him get his rhythm back,” Irving said of Williams. “He hasn’t played in a while.”

Deron Williams was only expecting to play 10-12 minutes, but was still ready when inserted in the game.

“My legs felt a little heavy and I had a little rust,” Deron Williams said. “Right now, I’m just playing on the fly.”

Tight defense allowed the Cavaliers to hold a 26-20 at the end of the first quarter, holding the Celtics to just 28 percent shooting from the field. Things changed in the second period as Boston managed to connect on 63 percent of its attempts, with Cleveland heading to halftime with just a 50-49 advantage.

In the last four minutes of the third quarter, the Cavs’ outside shooting went cold, missing their last nine attempts. Neither team was particularly prolific during this stretch, which allowed Cleveland to enter the final period trailing by just three points at 74-71.

“It definitely felt like a playoff game,” Lue said. “The physicality was big on both sides.”

The road string continues on Friday night when the Cavaliers head to Atlanta to face the Hawks, with Korver returning to his former home for the first time since he was dealt to the Cavs on Jan. 5. Tipoff for that clash will be just after 7 p.m. ET.

“We’re not where we want to be, but we’re playing some great ball right now,” James said.