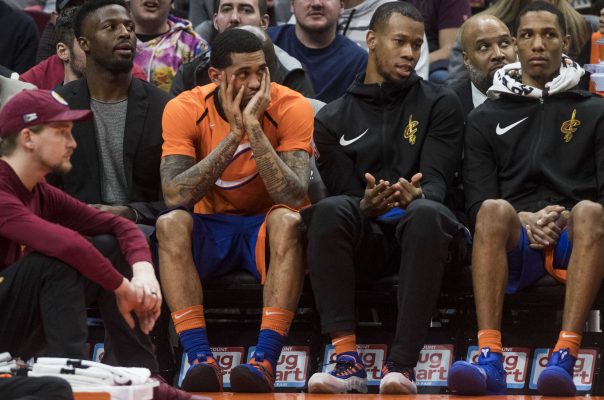 The Cleveland Cavaliers just finished a Western Conference road trip in which they won just one game out of six, and guard Jordan Clarkson expressed his disappointment to Chris Fedor of Cleveland.com with some strong language.

“It’s hard to gauge how this road trip went,” Clarkson said. “S—, we’re missing our whole damn frontcourt and we have to learn how to play through that kind of stuff and still find a way to compete.”

Clarkson isn’t necessarily saying that the Cavs would have enjoyed more success had Tristan Thompson and Kevin Love been able to play for the entire road trip, but their absences do undoubtedly make winning a bit harder. Thompson played in the first four games of the trip, including the win over the Los Angeles Lakers, but missed the last two.

Love, hasn’t played since very early in the 2018-19 season when he opted to get surgery on an injured foot. He should be back on the court sometime within the next month.

Still, despite the losses during the road trip, and the Cavs’ current 9-38 record, Clarkson made it clear that he does not intend to throw in the towel anytime soon.

“I don’t accept that,” Clarkson said. “I’m trying to compete in games. It’s tough. But we don’t even have a team. You’re playing Channing right now and he wasn’t even getting no minutes this year. All these guys dealing with injuries and stuff like that. Sometimes coming into the game a little overmatched. But I’m not set on this is how we are. You can’t gauge what we are with, what, six dudes out. There’s no gauging anything. I’m not going to let myself fall into that.”

It’s good to see that players such as Clarkson have not given up on the team. When the losses begin to mount, players can lose interest and locker rooms can fall apart. That doesn’t seem to be taking place in any way in Cleveland.