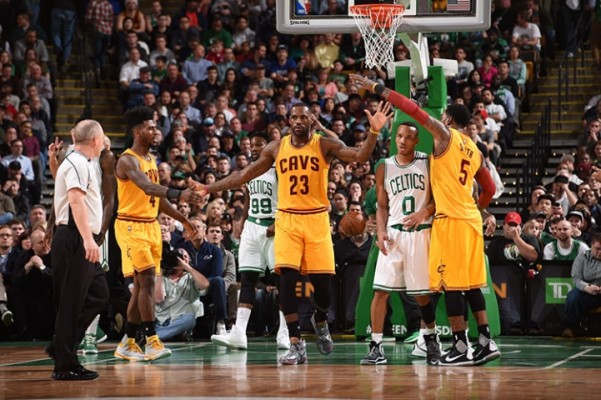 (Boston, MA) – Using a suffocating second-half defense that held their opponent to just 31 points on 26 percent shooting from the field, the Cleveland Cavaliers collected their third consecutive victory with a 89-77 win over the Boston Celtics at TD Garden on Tuesday night.

That defense helped transform a 46-40 halftime deficit into a 69-61 lead after three quarters. During those 12 minutes of action, the Cavaliers used a 17-2 run to take control. Cleveland had trailed 50-45 with just under nine minutes left in the third, but over the next five minutes, Boston missed nine of their 10 field goal attempts and the Cavs took full advantage to forge a 62-52 lead.

From that point, the closest the Celtics could get was five points as Cleveland closed out the quarter by outscoring Boston 29-15. In the fourth, the game would get only as close as seven at 79-72 before eight straight Cavs points helped make the margin 15 with just under four minutes left in the game to end any comeback hopes.

LeBron James once again led Cleveland with 24 points, adding seven rebounds, three assists and two steals. James and Boston’s Jae Crowder battled throughout the game, and James was asked after the game about Crowder’s trash talking:

“I’m able to do things that don’t have anything to do with the game,” said James. “But I know what needs to be done when it’s time to play.”

In postgame comments, Cavaliers head coach David Blatt spoke about the Celtics’ approach that sometimes led to some contentious moments:

“They’re a physical team, but there’s a lot of physical teams,” said Blatt. “But this is a team that’s been playing very well.”

Blatt then spoke about the total team effort that was evident:

“We got a great contribution from everyone who stepped on the court tonight,” said Blatt.

Kevin Love‘s first game back in Boston since his season-ending injury last April was a successful one. The power forward ended up with 20 points and seven rebounds. He dismissed any revenge motivation entering the contest:

“Life’s too short to hold grudges,” said Love. “Nobody was thinking about it, we just wanted to get the win.”

Asked about what changed at halftime, Love said that particular schemes were looked at:

“We needed to go after (Avery) Bradley and (Isaiah) Thomas,” said Love. “We were able to make those adjustments.”

After the break, that duo of Bradley and Thomas was held to just 11 points after having scored a combined 18 in the first half.

Blatt gave credit to J.R. Smith for his work against Bradley:

“J.R. limited his opportunities and that’s what you want,” said Blatt.

Smith spoke about why the Cavs’ defense has shown solid improvement:

The “chippy” nature of the game provided an amusing comment from Smith, who added a remark concerning the controversy surrounding Jae Crowder demanding an apology from him:

“I like it, it wasn’t chippy enough,” said Smith. “He (Crowder) might be waiting on that apology.”

The news wasn’t all good on the evening as Iman Shumpert, playing in just his second game back from a wrist injury, was forced to leave the game in the fourth quarter with what described as an injury to his right groin. No word on his status for upcoming games was available.

The win improved the Cavaliers’ season record to 16-7 while Boston fell to 14-11 on the year.

The Cavaliers now return home to face the Oklahoma City Thunder in an 8 p.m. ET matchup that will be shown nationally on TNT. Last season, the two teams split their two matchups, each winning at home.