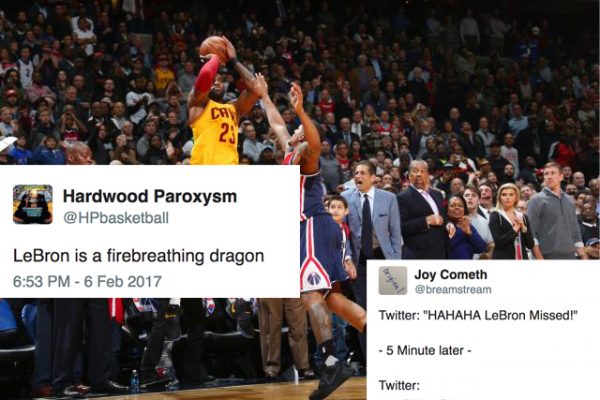 On Monday night as the Cleveland Cavaliers took on the Washington Wizards at Verizon Center, superstar LeBron James made a shot at the end of regulation that very few superstars in this league could’ve made.

With the Cavs trailing 120-117 and a little over three seconds remaining on the game clock, power foward Kevin Love threw a full-court heave to James on the opposite end of the floor. The four-time MVP took one dribble turned around, and while fading out of bounds, sunk a miraculous game-tying triple to force overtime. Not only did those in the arena erupt as soon as the shot went in, but also apparently those watching from home.

Here are the best Twitter reactions from Monday night:

LeBron is a firebreathing dragon

Miss the open layup so I can hit the game-tying 3 pic.twitter.com/igY8Y3AXFc

“The pizza rolls are ready." pic.twitter.com/xvRRhMtSoZ

Wiz/Cavs better than the Super Bowl. Don't @ me.