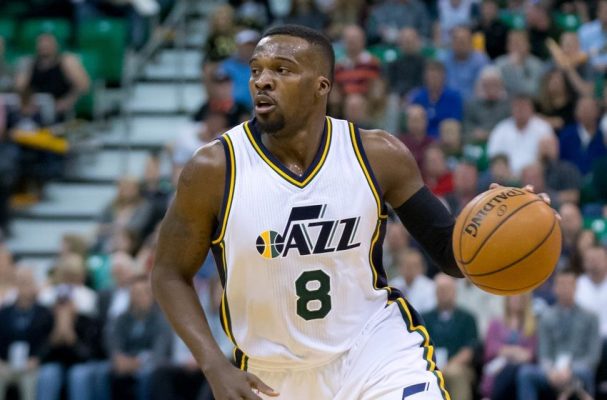 The continuing search by the Cleveland Cavaliers for a veteran point guard to back up Kyrie Irving has brought up a number of options over the past few weeks. One new name that appears to have been added to the mix is Utah Jazz point guard Shelvin Mack.

ESPN’s Marc Stein is reporting that Cleveland has expressed some interest in acquiring Mack prior to the Feb. 23 deadline. Presently, the Cavaliers have two trade exceptions that they would be able to use in a potential deal: the $4.4 million Anderson Varejao exception that will expire on Feb. 20, and the $4.8 million exception created in the wake of the Kyle Korver trade, which expires on Jan. 7 of next year.

Stein notes another name that’s also been mentioned in connection with the Cavs: Denver Nuggets point guard Jameer Nelson. The Cavaliers though, would be forced to use the Korver exception in order to accommodate his $4.5 million salary.

Mack is making $2.4 million this year, averaging 7.9 points and 2.9 assists per game for the Jazz, who have apparently indicated his availability to other teams. He’s started nine of 42 games, averaging 22.5 minutes per game.

The Jazz guard will turn 27 on Apr. 22 and is currently in his sixth season in the NBA. He was originally a second-round draft pick out of Butler University by the Washington Wizards in 2011, where he played parts of two seasons before being released. He subsequently played for the Philadelphia 76ers and Atlanta Hawks before being dealt by the Hawks at the trade deadline last year as part of a three-team deal.