Don't Miss
Home / Media / LeBron James and Tyronn Lue Confirm Who Was at Fault in Botched Play vs. Spurs

LeBron James and Tyronn Lue Confirm Who Was at Fault in Botched Play vs. Spurs 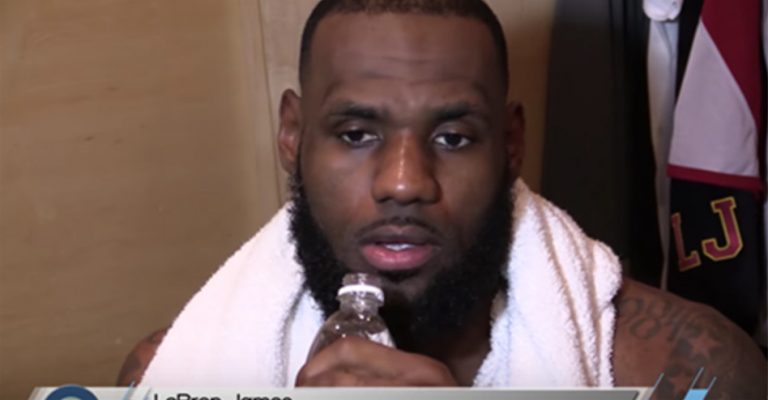 A crucial mental lapse by the Cleveland Cavaliers in the final minute of overtime played a key role in their 118-115 loss to the San Antonio Spurs on Saturday night. That error had occurred because both Kyrie Irving and Tristan Thompson weren’t where they were supposed to be as the Cavs attempted a “hammer” action in the final moments of the game.

Cleveland.com’s Joe Vardon noted that Cavaliers head coach Tyronn Lue drew up the play during a timeout, whereby LeBron James was supposed to throw a pass to Irving in the corner. Irving was supposed to have been freed by a backscreen from Thompson. The problem was that Thompson didn’t screen his defender, the Spurs’ Danny Green, and Irving never took off for the corner, where he presumably would have been wide open to take a potential game-tying 3-pointer.

The end result was James throwing a pass out of bounds and San Antonio, clinging to a 116-113 lead, holding on for a road victory.

“We watched it on tape, Kyrie would’ve been open. Danny Green had no clue what was going on but we didn’t execute it right,” Lue said. “There was confusion at the beginning, with the first part of it, but then Tristan has to come up and set the hammer. He kind of stopped in the middle of the paint because I guess the way (LaMarcus) Aldridge was guarding him or whatever. But we didn’t execute it cleanly.”

James was clearly annoyed with the error in the immediate aftermath of the play, then later offered this comment:

“As a ball club that’s trying to win a championship, we can’t have you go from a timeout to the court and forget what you’re supposed to do,” James said. “It’s that simple.”

Irving also acknowledged the error in his remarks after the game:

“There was a miscue there was supposed to be a flare on the back side with me and Tristan. Going forward we’ll probably look at film and see where we can get better at that throughout the whole entire game,” Irving said. “Just a miscue, just a miscue. That’s all.”

James’ turnover was his seventh of the night and 18th for the team, a key reason why the Cavaliers lost their second game in the last six days. They’ll look to return to the win column when they travel to face the New Orleans Pelicans on Monday night.