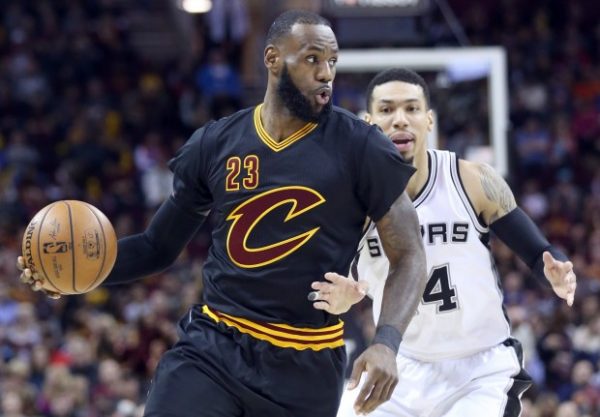 (Cleveland, OH) – Despite a dramatic last-minute comeback in the final minute of regulation, the Cleveland Cavaliers ended up on the losing end of a 118-115 overtime decision to the San Antonio Spurs on Saturday night at Quicken Loans Arena.

With just under a minute left in regulation, the Cavaliers had trailed 107-102. LeBron James then hit two free throws and nailed a 3-pointer from more than 30 feet out to tie the game with 34.9 seconds remaining. A Spurs miss allowed James to put up a 3-point attempt at the buzzer to try and win it, but it came up short.

In the overtime, Kyrie Irving scored all eight of the Cavaliers’ points, but some costly miscues during the extra session proved to be the dagger for Cleveland. The game ended with a missed 3-pointer at the buzzer by Kevin Love that wasn’t close and dropped the Cavs to 30-12 on the year.

“No excuse, we have to be able to execute,” James said. “It’s that simple.”

A slow start to the fourth quarter by the Cavaliers had forced the late comeback as Cleveland’s five-point lead entering the last quarter quickly disappeared. San Antonio put together a 12-1 surge to start the period and took a 96-90 lead with nine minutes left. Then, with just under six minutes left, the Spurs boosted the Cavs’ deficit to nine at 103-94.

Cleveland’s struggles at the foul line ended up costing them as they missed 10 of their 22 attempts. The loss marks the first time this year that the Cavaliers have suffered a defeat when leading after three quarters, entering the contest with a 26-0 mark.

Asked about James’ deep 3-pointer and whether it was a designed play, Cleveland head coach Tyronn Lue was succinct:

“That’s the shot he took and we were happy with it,” Lue said.

All five members of the Cavs’ starting lineup ended up scoring in double figures, led by James and Irving. Each finished with 29 points, with James adding seven assists and six rebounds and Irving handing out a game-high nine assists on the night.

Tristan Thompson and Love each collected a double-double, with Thompson scoring 14 and grabbing 12 boards and Love adding 13 points and 11 boards after missing Thursday’s game with lower back trouble. Iman Shumpert rounded out the group with 11 points and a pair of steals.

During the second quarter, the Cavs had huge problems on the defensive end as the Spurs scored 19 of the first 21 points of the period en route to a 29-11 run that gave them a 51-44 lead. The Spurs seemingly couldn’t miss, connecting on 14-of-17 shots (82 percent) from the field in the period.

“They scored 35 points in the second quarter,” Lue said. “Our players weren’t getting back in transition.”

On the offensive side, the Cavaliers remained solid during that second quarter, hitting at a 61 percent rate themselves. That helped fuel a late 14-6 push that allowed them to head to intermission holding a 58-57 lead.

After the break, both teams again traded baskets for much of the third quarter. The game was tied eight times during the period, the last time coming in the final minute on a Spurs basket. However, the Cavs closed the quarter out with five points to take an 89-84 lead into the final 12 minutes.

“We turned the ball over in the second half, missed free throws. They’re a disciplined team and took advantage of it,” Lue said. “We played good, we just couldn’t finish it off.”

On Monday night, the Cavaliers will be down in the Big Easy as they take on Anthony Davis and the New Orleans Pelicans. Tipoff for that contest will be just after 8 p.m. ET.