Kyrie Irving Opens Up About His Relationship With LeBron James 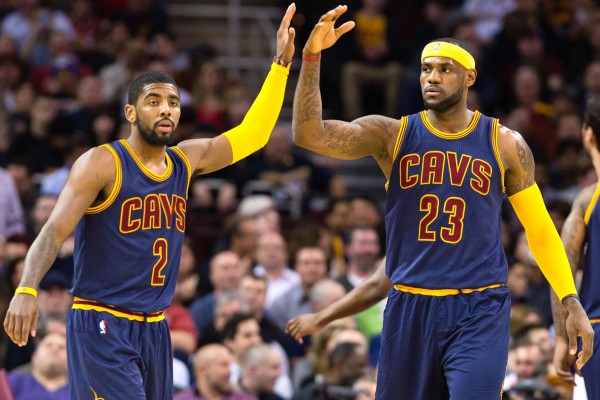 Despite concerns of chemistry problems that were discussed during the offseason and grew in the first struggling months of their on-court relationship, the Cleveland Cavaliers’ Kyrie Irving now says his relationship with LeBron James is coming along just fine, with the two establishing a friendship off the court.

Irving spoke to the Cleveland Plain Dealer and said, “I don’t want to say it’s not been rocky at all. Obviously, he sees the game one way, I see the game another way. What makes it great about being on the team is that we can both see it together in our own way.”

Those early struggles were evident within one week of the start of the regular season, when the Cavaliers dropped three of their first four games. Two of those defeats came in back-to-back clashes against the Portland Trail Blazers and Utah Jazz.

After the first loss, James talked about how the Cavs had developed “bad habits” during his time away in Miami, an unsubtle reference to Irving. Then, when they lost on a buzzer-beater the next night, James was upset enough with Irving to confront him directly after the point guard scored 34 but failed to hand out a single assist.

Irving recalls that conversation, saying that James told him, “One, you can never have another game with no assists. You can damn near have one, two, three, but you can’t have zero.” Irving took the conversation to heart and the goose egg hasn’t happened since.

The efforts were especially upsetting to James, who said that being able to have Irving on his team was one of the keys to re-signing with Cleveland.

Irving also talked about the difference between this year and last, saying, “When we came into the locker room last year, it would probably be about the performance I had, in a selfish way. Because, you know, you become a losing team, you build bad habits.”

While Irving has since accepted James’ style of play, he’s also been able to carve out a good portion of offense for himself. The most prominent examples of this came in the 55-point performance against Portland on January 28 and the 57-point effort against the San Antonio Spurs on March 12.

Also, the more than seven years in age difference has essentially melted away after James had some concerns early on. Irving commented about it, saying, “It doesn’t matter that he’s older. I’ve been playing against older guys my entire life.” He then added, “I feel like I have an old-school game. I do things people probably think a 23-year-old shouldn’t know how to do.”

In reaching this stage, the two needed to find a happy medium in order for the team to succeed. In truth, that quest continues as they attempt to get Kevin Love more integrated into the nightly offense.

However, Irving has detected a difference in James’ attitude, saying, “LeBron’s view of things has changed because it’s no longer, he’s not looking across the locker room and asking, ‘Does this guy have my back?’ or, ‘Is this guy my brother?’”

The relationship has developed enough that the two were recently spotted in a Miami nightclub and frequently make plans to get together after games.

How much this stronger bond helps the Cavaliers as they enter the postseason is unknown, but it certainly is a far cry from the struggling early months of this season. That in itself is one reason to have a great deal of confidence when it comes to the team’s chances of winning an NBA title.