Cleveland Cavaliers vs. Sacramento Kings Game Recap: Back on Track 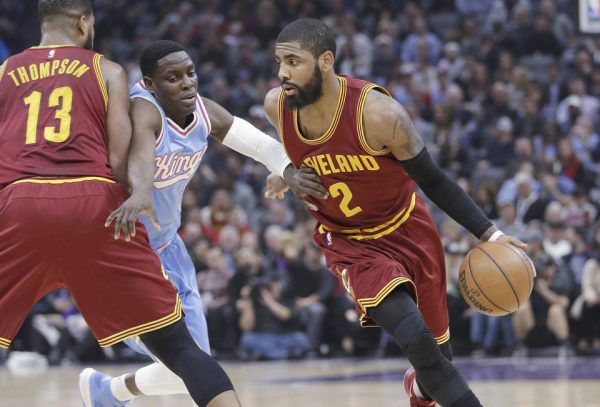 (Sacramento, CA) – Thanks to a strong first quarter, the Cleveland Cavaliers were able to navigate through a string of uneven patches during the rest of the game and return to the win column by picking up a 120-108 victory over the Sacramento Kings at Golden 1 Center on Friday night.

Cleveland took a 19-point lead during the opening 12 minutes, then repeatedly fought back attempts by Sacramento to pull off a comeback. With 9:36 left in the game, the Cavs were clinging to a 90-84 lead before a 9-2 push offered enough of a cushion for the rest of the game. From that point, the two teams effectively traded baskets.

Kyrie Irving was one of six Cleveland players to score in double figures on the evening, notching a game-high 26 points and five assists. The newest addition to the team, Kyle Korver was next with 18 points on 7-of-10 shooting from the field, including four 3-pointers and five rebounds.

“It helped when that first one went down for me. When I started out the game, I felt like a rookie out there, my mind was racing, ” Korver said immediately after the game. “Obviously, LeBron (James) makes it easy for everybody and found me a few times and it was nice to make a couple in a row. That slowed me down and got me in a good rhythm.”

“He competes and plays hard,” Lue said. ” There was a lot of movement on his part. He did a good job of moving off the ball and ‘Bron was able to get him the ball.”

James and Iman Shumpert each collected 16 points on the night, with James dishing out a whopping 15 assists, matching a season-high in that category.

“That’s just how I play the game. However the game is dictated, I take advantage of it,” James said of his assists. “My guys made their shots.”

“He just got more comfortable with what we wanted him to do this morning in shootaround,” James said. “This morning was the first time he got the opportunity to see what we wanted to execute and how he can be a part of that. It was great to see him hitting those shots and we want him to keep firing.”

Kevin Love also collected a double-double on the night with 15 points and 18 rebounds, while Channing Frye rounded out the contingent with 10 points.

“I just wanted to affect the game in different ways tonight, including cleaning the glass,” Love said.

A trio of factors helped the Cavaliers build up that huge first-quarter advantage in their first-ever visit to the Kings’ new home. Hitting 11-of-16 from the field to start the game, coupled with forcing nine turnovers and holding Sacramento to a miserable 26 percent resulted in a 23-4 run for the Cavs. That turned a seven-all deadlock into a 30-11 Cleveland lead.

“We were just adjusting to the way they were playing us defensively,” Irving said.

Beginning a schizophrenic second quarter with a 32-15 lead, the Cavaliers boosted their lead to 43-22 with 8:15 left before intermission. The Kings answered with 11 unanswered points to make it a 10-point game, with the Cavs then answering in similar fashion with 11 unanswered points of their own. By the end of a 16-2 run, Cleveland had held their biggest lead of the game at 59-35, but Sacramento then managed to score eight straight points. That was shortly before the teams headed to halftime with the Cavaliers holding a 61-43 advantage.

A slow start to the second half then saw the Kings slice that margin down to just eight points, courtesy of a 15-3 run. However, just like the second quarter, the Cavs answered in kind with a 14-1 surge that included 11 unanswered points to make it 80-59. Yet Cleveland was unable to deliver the knockout blow as Sacramento closed the quarter with a 15-4 surge to make 84-74 with one quarter to play.

“Tonight, I thought we had a lot of great ball movement,” Lue said of the team’s 27 assists.

With two days off, the Cavaliers will be able to work in some practice time before they take the court on Monday against the team that’s become their archrival, the Golden State Warriors. The last time the Cavs were on that court, they walked off as NBA champions.