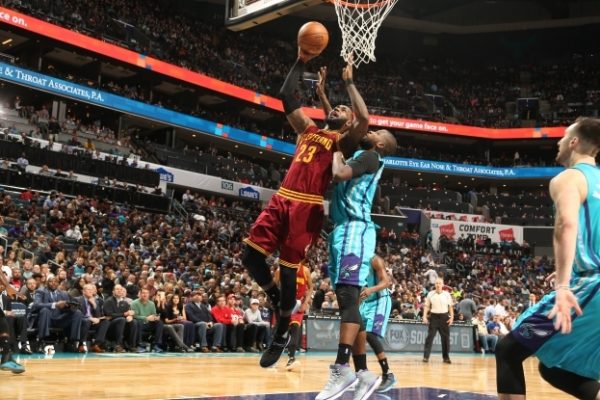 (Charlotte, NC) – Despite missing one of the key weapons in their lineup, the Cleveland Cavaliers managed to close out the 2016 portion of their season with a 121-109 victory over the Charlotte Hornets at Spectrum Center on Saturday night. The Cavaliers were without the services of starting point guard Kyrie Irving, who sat out the game due to hamstring issues.

In his place was reserve guard Jordan McRae, who put up a strong performance by scoring 20 points, including a trio of 3-pointers. Supplementing McRae’s effort was the play of rookie Kay Felder, who contributed 13 points, connecting on 5-of-6 from the field. In addition, the 5-foot-9 guard showed his feisty nature by scoring a number of his points on drives to the basket, concluding a turbulent week that earlier saw him being sent to the team’s D-League affiliate Canton Charge.

“I had my confidence. Going down to Canton (and scoring 33 points) gave me some swagger,” Felder said. “I was just ready to play.”

LeBron James had a team-high 32 points, adding nine assists and six rebounds, while Kevin Love added another double-double with 28 points and 10 rebounds. The reconfigured Big Two scored 45 of those points during the first half, with James notching 17 in the first quarter.

“I was locked in from the start and I needed to be, considering what we were facing,” James said immediately after the game. “It was next man up for us tonight and J-Mac (McRae) and Kay (Felder) stepped up.”

The first half was a dizzying back-and-forth series of runs for both teams. Things were relatively even keel for the first six minutes of action, but changed abruptly after Charlotte took a 15-14 lead with 5:54 to go in the period. Cleveland went on a 16-2 run shortly afterwards in slightly over a three-minute span. However, the Hornets scored 11 of the final 16 points to slice the Cavs lead to 35-28 at the end of the quarter.

The Cavaliers roared out of the gate to start the second on a 16-4 run to take their biggest lead of the half at 51-32. Responding just as powerfully, the Hornets put together a 20-5 surge to make it a 56-52 game with 2:45 left before halftime. Cleveland then responded with nine unanswered points as part of a 15-7 run to head to intermission with a 71-59 lead.

In the third quarter, Tristan Thompson awakened after a virtually non-existent first half by scoring 11 points and teaming with McRae to score the team’s first 20 points of the period. During the final quarter, Charlotte was able to get the lead down to eight points with 5:34 left, but couldn’t get any closer the rest of the way,

“Once I hit a few shots, they started playing tighter and I was able to drive to the basket,” McRae said. “I just wanted to treat this game like another game. I didn’t even tell my mom and dad about it because I didn’t want to add to the pressure.”

Cavs head coach Tyronn Lue took time during his postgame remarks to acknowledge the efforts of McRae and Felder:

“It was great for those guys to come in and play the way they did,” Lue said. “They work hard in practice and stay ready.”

McRae and Felder’s teammates on the bench showed their support for their efforts, which didn’t go unnoticed by McRae:

“Anytime you see your teammates support you like that, it gives you more confidence,” McRae said.

The Cavaliers begin 2017 play on Monday night when they return to Quicken Loans Arena as they host Anthony Davis and the New Orleans Hornets. Tipoff for that game will be just after 7:00 p.m.

“We have some huge aspirations and we want to put ourselves in a position to compete for a championship,” James said. “We’ve hit the injury bug and that’s the only thing that sucks about our team, but we will get healthy and play some of our best basketball late in the season. Right now, it’s all about the process and we’re right where we should be.”