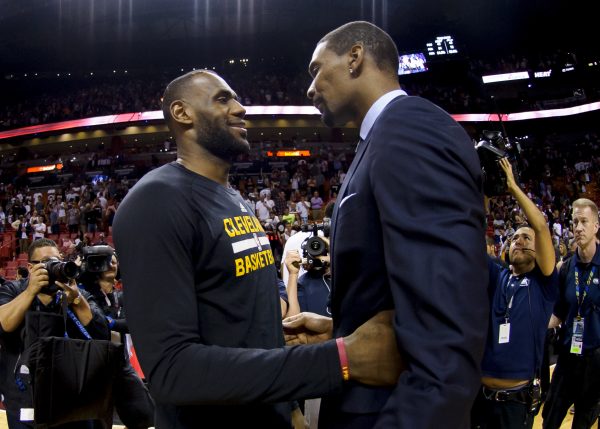 James and Bosh arrived in Miami in 2010 and helped team with Dwyane Wade to lead the Heat to two NBA titles and four consecutive appearances in the Finals. Since James’ return to Cleveland, Bosh has missed the second half of the last two seasons due to issues involving blood clots.

During this past offseason, Bosh had indicated that new advances in medication would’ve allowed him to take blood thinners early in the day so that they would’ve been out of his system by that night’s game. Despite that possible breakthrough, Riley indicated on Monday that Bosh’s career with the Heat has likely ended.

Asked about the situation following the Cavaliers’ first practice, James offered his best wishes to Bosh in comments quoted by Cleveland.com.

“We all know it’s probably a difficult situation for him,” James said. “(I was) pretty surprised a little bit to hear that the team is just done with him, and then to come out and say it. It’s not like I’ve been there, to know exactly what’s going on in the interior. So I’ve only seen it from the exterior like the rest of us. I just wish the best for him and he has my support.”

This isn’t the first time that James has voiced his displeasure with the Heat’s upper management, as he dropped this subtle message after beating the Golden State Warriors in this past year’s NBA Finals:

“When I decided to leave Miami — I’m not going to name any names, I can’t do that — but there were some people that I trusted and built relationships with in those four years [who] told me I was making the biggest mistake of my career,” James said. “And that s— hurt me. And I know it was an emotional time that they told me that because I was leaving. They just told me it was the biggest mistake I was making in my career. And that right there was my motivation.”

Again, James doesn’t explicitly mention any names here, but at this point it’s safe to say that James didn’t end his relationship with Miami on good terms.

There’s no indication that Bosh intends to retire, which puts his current status in limbo.