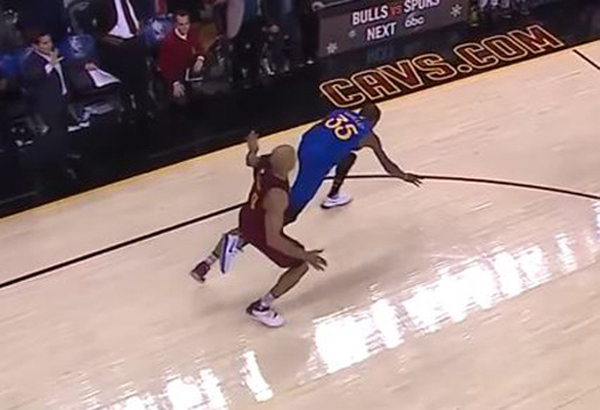 With 3.4 seconds to go and the Golden State Warriors trailing by just one point, small forward Kevin Durant received the ball and was on his way to make an offensive move but was tripped by opposing Cleveland Cavaliers forward Richard Jefferson.

The foul went uncalled and many fans were clamoring that had the foul been called, the Warriors would’ve beaten the Cavs in that highly-anticipated Christmas Day matchup.

The NBA later confirmed in its Last Two Minute Report that the trip by Jefferson was indeed a foul that went uncalled, however Durant says that the final play shouldn’t have particularly mattered:

“Just move on. Don’t throw the refs under the bus like that. Now the next game, that group of refs, whoever it is, they’re going to come out intentionally ref the game, try to get everything right and perfect without just going out there relaxing and trying to make the right call. You can’t fine us for when we go out there and criticize them and throw them under the bus for the two-minute report. What about the first quarter, the second quarter, the third quarter?

“I think it’s bulls–t. They should get rid of them. Refs don’t deserve that. They’re trying their hardest to get the play right, then you look at the play in slo-mo and say it’s wrong. I think it’s bulls–t that they do that. Full of s–t that you throw the refs under the bus like that after the game. Like it matters. The game’s over. We move on.”

Durant may have a point as the Warriors had held a 14-point lead in the fourth quarter, which they saw slip away due to the offensive onslaught of both LeBron James and Kyrie Irving.

The Warriors will get a chance at redemption on Jan. 16 as the Cavs will visit Oracle Arena for a game set to tip off at 5 pm E.T.