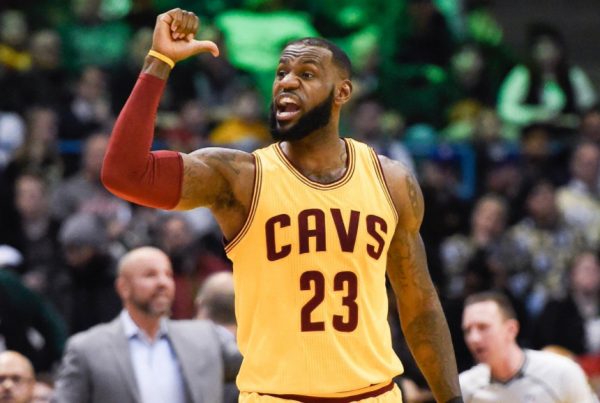 (Milwaukee, WI) – LeBron James’ cold-blooded 3-pointer with 24 seconds left in overtime helped the Cleveland Cavaliers outlast the Milwaukee Bucks by a 114-108 score at the Bradley Center on Tuesday night.

With the Cavaliers trailing 108-107 in the final minute, James connected on his fifth 3-pointer of the night to give Cleveland a two-point lead. The Bucks’ Jabari Parker was then fouled, but missed both free throws. That allowed the Cavs to clinch it with two free throws by Kyrie Irving with 15.7 seconds to play and two more by James with 10.7 seconds left.

“Coach (Lue) drew up a great play and my man went underneath the screen,” James said immediately after the game. “I felt confident about it, and if a guy is going to go that far under my pick-and-roll, I’ve got to be able to hit those shots and I did that tonight.”

The win spared the Cavaliers from suffering a devastating collapse. They appeared to be in control of the game during regulation, holding a 100-93 lead with 90 seconds left. However, the Bucks countered with two points at the 1:25 mark and a 3-pointer with 47.3 seconds to go to make it a two-point game.

Three missed shots by Cleveland then allowed Milwaukee to tie the game with 15.5 seconds to play, which was followed by Irving’s 3-point miss with 1.9 seconds to send the game into overtime.

Cavs head coach Tyronn Lue spoke about why James was so prolific with his 3-point shot:

“They were going under all night and we told him if they go under, you have to step into it and take that shot,” Lue said.

The win was accomplished despite not having Kevin Love in the lineup. Love sat out the game to recover from a left knee contusion suffered in Saturday night’s victory over the Los Angeles Lakers. Richard Jefferson tossed in eight points in his place, five of those coming in the overtime.

“When Kyrie and me are out on the court, we have to be able to lead this team, no matter who’s out,” James said. “That last one was pretty far out. I didn’t know he was going to take that one, but it was a big shot that we needed.”

Channing Frye chipped in with 15 points off the bench, then joked afterward about the second of his two assists on the night. That’s because it came on James’ game-winner.

“You know what I was thinking? I really need this assist,” Frye said. “For me, it’s understanding when to roll and when to pop.”

The Cavaliers started out hot, jumping out to an early 18-6 lead before then taking their biggest lead of the half at 26-11 following a 3-pointer with 3:58 left in the quarter. For the first period, they made 54 percent of their shots and connected on five 3-pointers.

James once again made history as he passed Moses Malone on the all-time scoring list with his first basket of the night. That came with 9:11 left in the opening quarter, putting James in eighth place with 27,442 points. It’ll be a while before his next milestone is reached, with former teammate Shaquille O’Neal in the seventh spot with 28,596.

The problem for the Cavs was that the Bucks ended the quarter even hotter, hitting on 62 percent of their shots and going on a 16-9 run to slice their deficit down to eight at 35-27 when the first quarter ended.

Both teams cooled off in the second quarter, especially the Cavaliers. Hitting just 41 percent of their attempts, they saw the Bucks continue to chip away at their lead before heading to intermission with just a 57-53 advantage.

The Cavs fell behind by four points on two occasions in the first half of the third quarter, the second time coming after a 3-pointer from former Cavalier Matthew Dellavedova that made it 71-67 with 6:22 to go. For the remainder of the period, Cleveland used a 17-7 surge to take control of the game’s momentum.

Part of the problem in the fourth quarter when it came to putting away the Bucks was the fact that the Cavaliers managed to hit just 25 percent of their 20 shots in those last 12 minutes of regulation.

One down note on the night was the loss of J.R. Smith, who left the game with a first-half thumb injury, playing only 17 minutes and scoring only six points.

These same two teams meet tomorrow night, though the scene shifts from Milwaukee to Quicken Loans Arena. Tipoff will be just after 7 p.m., with another pregame ceremony planned that will present Dellavedova with his championship ring from last season.