Video: LeBron James Speaks on Status of His Near Injury 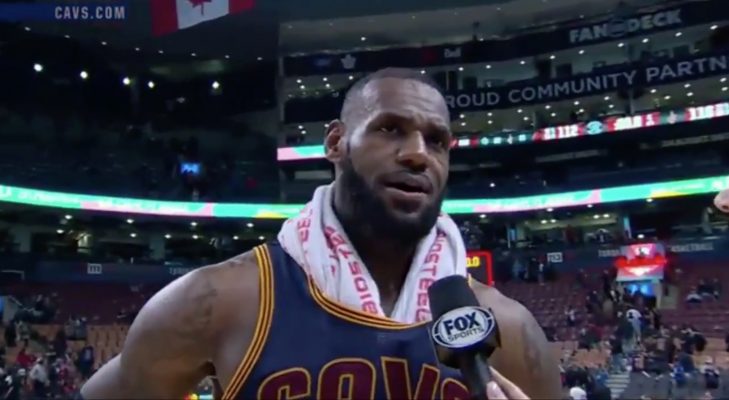 A scary moment for Cleveland Cavaliers forward LeBron James in Monday night’s 116-112 win over the Toronto Raptors that could’ve had serious ramifications on Cleveland’s season doesn’t appear to be an issue for the veteran forward, who found time to joke about his health during his postgame remarks.

A first-quarter dunk by James ended with him landing awkwardly on the ground and caused a brief stoppage in play. The scare didn’t affect the superstar, who went on to score 34 points and put an end to the team’s three-game losing streak.

That attitude was evident in James’ postgame remarks with Fox Sports Ohio sideline reporter Allie Clifton. In her last question, she asked him about his health status and James responded this way:

Is LeBron breaking some news to @FSOAllieOop?

There was little doubt that James would even think of sitting out a game played in Madison Square Garden, where the Cavs will take on the New York Knicks on Wednesday night in a game set to tip off just after 8 p.m. He’s spoken in the past of his reverence for the history of the facility.