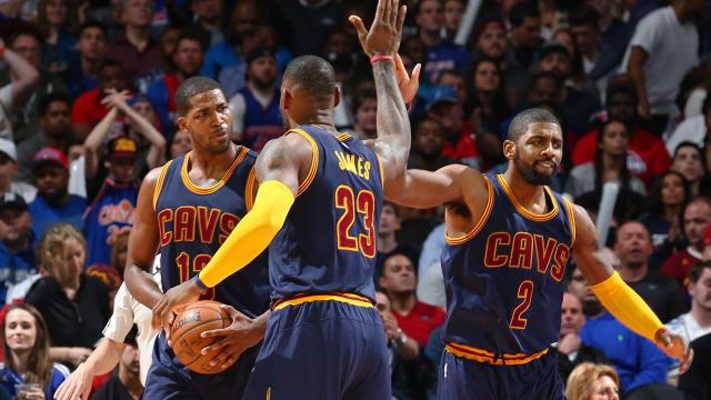 With the Cleveland Cavaliers having established a new benchmark for 3-pointers to start a season, the prospect of extending such success across the entire season is now serving as motivation to break a record set by their archrival Golden State Warriors. The team’s head coach, Tyronn Lue, even suggests that his team is just getting warmed up.

Dave McMenamin wrote about the team’s prowess from long-range after they connected on 14 3-pointers in Sunday’s 100-93 victory over the Charlotte Hornets. That gave them nine consecutive games with double-digit 3-pointer totals to start a season, moving past the 2014-15 Houston Rockets at eight.

In nine contests this season, the Cavs are averaging 13.22 3-pointers per game, which puts them on pace to surpass the Warriors’ record-setting 13.13 made 3s per game last season.

“We have a lot of great shooters,” Lue said. “I think we can even make more shots. I think we’re missing a lot of open shots that we normally make. It’s going to come once the season gets going. I think our shots will come along a lot better.”

One player who helps facilitate those shooters, LeBron James, spoke about how the current Cavs roster parallels the one he had in in Miami, where players like Ray Allen joined former Cavalier Mike Miller and current Cavs veteran James Jones. During his time in Miami, James won consecutive NBA titles, something that’s in his sights this year.

“I pretty much know what personnel works for my type of basketball game,” James said. “So I knew what we needed. I know it works for me. And I think our GM and our coaching staff have done a great job of fulfilling that.”

One huge asset when it comes to 3-pointers that Cleveland didn’t have at this point last season is Channing Frye. A 7-foot center, Frye can also go deep to frustrate his opponents, who prefer to stay close to the rim.

“Big guys like the paint,” Frye said. “I make them allergic to it. It’s just kind of how it is. You know when you have that train [James] down there or when Kevin [Love’s] going, Kyrie’s going, their big guy … wants to help. But he can’t help. So he’s got to come to Frye-land. Just sit out there with me. So it’s a pick-your-poison kind of thing. I think when we’re all going, we’re all hitting, it’s pretty tough to guard.”

The scary thing for opponents is that three of the Cavs’ 3-point options: Mike Dunleavy, Richard Jefferson and J.R. Smith, haven’t even gotten hot yet.

Trying to manage those shooters while also dealing on a one-on-one basis with James, Kevin Love and Kyrie Irving might end up driving opposing defenses crazy.

“If you’re living with me getting 40, LeBron getting 40 and Kev getting 40,” Irving said. “If you’re not going to basically play us honest, you’ve got to live with something.”

The Cavaliers will have three chances this week to keep up the record pace, hosting Toronto on Tuesday before a road clash at Indiana on Wednesday and another home matchup versus Detroit on Friday.