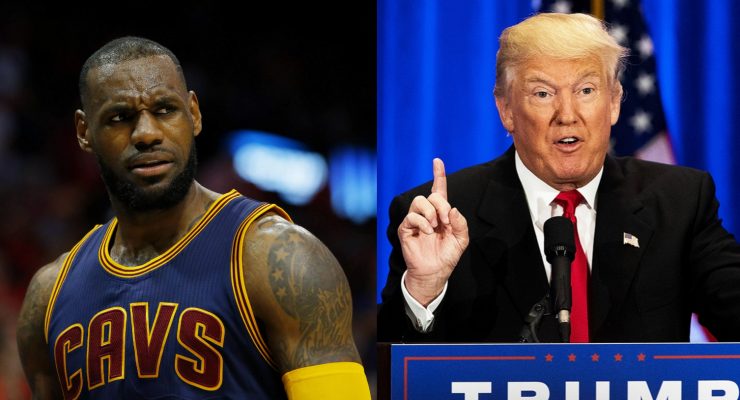 There was really only one thing that mattered on Nov. 8 for the citizens of America, and that was the 2016 presidential election between Hillary Clinton and Donald Trump.

As the night became the early hours of the morning, it was clear that Trump was set to become the president-elect.

While many Cleveland Cavaliers players were outspoken with their opinions before the election, they did not take to social media much after the votes were counted.

A few Cavs players, however, did post their reactions, including LeBron James, Iman Shumpert and J.R. Smith.

Smith posted a message on his Instagram page with a photo of his daughter, largely asking how he was supposed to explain the outcome of the election to his eldest child.

How do you explain to this face what happen? You can be a educated women in your field an not get the job because your a women or cause your black? How do you say "go try your best" even though it won't be good enough. How do I even feel confident sending her on play dates knowing the kids family voted for the racist, sexist person an I don't know how they will treat her when she's gone. How? Seriously How? I understand let go and let God! But damn!

It's always about race! Just because they are our friends, coworkers and like our music does not mean that they think we are equal. We were so in a hurry to keep making HIStory that we even picked the wrong candidate to run against blatant bigotry! We saw tonight that the white male dominated world wasn't ready for a women as their leader so in return they elected the poster boy for how they really feel but are afraid to say in public!!

He then also expressed hope that President Trump would do right by the country.

I just pray he figures it out. Please. Just do right by the country.

James posted the longest response, with a video that plays part of Kendrick Lamar’s “Alright.” James’ message indicated that he was disappointed in the results, but still felt that people could come together and effect change.

As I woke up today looking and searching for answers on what has happened this song hit it right on the head! If we continue the faith(as hard as it may be to do so) we will BE ALRIGHT!! Parents and leaders of our children please let them know they can still change the world for the better! Don't lose a bit of faith! They're our future and we must remain stronger than ever!! Yes we all wanna lace up the boots, put on the hard hats and strike but that's not the answer. Love, genuine LOVE and FAITH will be the only thing that can get us through this. Minorities and Women in all please know that this isn't the end, it's just a very challenging obstacle that we will overcome!! The man above will never put something in our paths that we can handle no matter how difficult it may feel/be! To all the youth out there I PROMISE I'll continue to lead u guys every single day without no hesitation!! Time to educate and even more mold my children into being the greatest model citizens they can become in life! They will continue the legacy beyond life! Lastly, Even if whos now in office doesn't, Know that I LOVE YOU'LL!!!