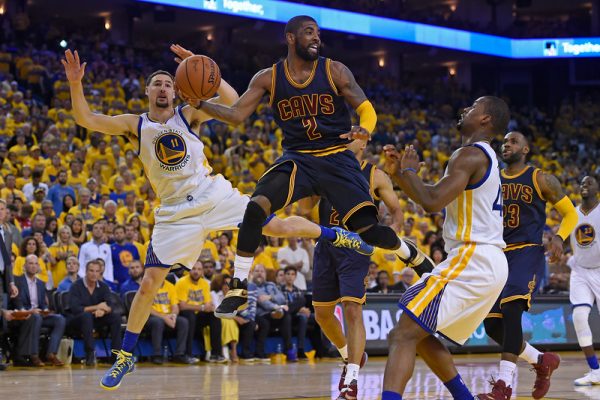 Kyrie Irving is going to have a pretty good summer.

It kicked off just a few weeks ago when he buried the game-winning 3-pointer in Game 7 of the NBA Finals over Stephen Curry to officially deliver the city of Cleveland its first championship in 52 years.

Since then, he has been in a huge parade, made several media appearances and now has accepted an invitation to play for Team USA in the Summer Olympics in Rio de Janeiro, Brazil.

Especially those few members of Team USA who he most recently defeated in the 2016 NBA Finals, specifically Draymond Green, Harrison Barnes and Klay Thompson.

"There are 3 Warriors on the team and I'm the champion, so I'll be throwing it in their face a bit."

– Kyrie Irving on the Olympic team

While the trash talking during the series was pretty intense, from Thompson proclaiming that the Warriors were better than the Showtime Lakers to the questioning of LeBron James’ manhood, the Golden State Warriors have largely been congratulatory towards the Cleveland Cavaliers players.

So while Irving will undoubtedly be consistently reminding Green, Barnes and Thompson about how he gets to spend his summer with the Larry O’Brien Trophy, it’s very likely that the trash talk will all be in good fun.

After all, once all four get on the court with the USA logo on the front of their jerseys, the only thing that will matter then is bringing home a gold medal.

And it’s very likely that if Team USA is going to accomplish that goal, it will need all four playing at their highest level, which for Irving, should just mean a continuation of the things we’ve all witnessed over the final few days of the NBA season.

Should Team USA succeed in Rio, it will likely cap off the greatest few months of the 24-year-old’s life.

And it will give him a medal to wrap around that Larry O’Brien Trophy.

The basketball portion of the Olympics is set for Aug. 6-21.