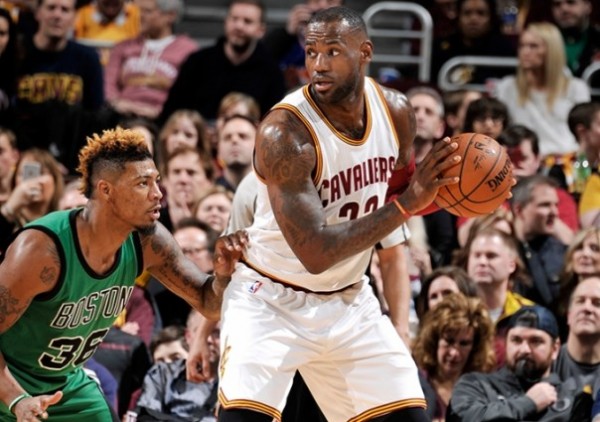 (Cleveland, OH) – Roaring back from an 18-point first-quarter deficit, the Cleveland Cavaliers got revenge on the Boston Celtics for a stunning loss exactly one month ago and won their third consecutive game with a 120-103 victory at Quicken Loans Arena on Saturday night.

One indication of just how dramatically the game changed over the final 37:22 was the fact that Cleveland outscored the Celtics 103-68 over that stretch. In addition, after hitting 15 field goals in the first quarter, Boston hit just 22 over the final three quarters as the Cavaliers’ defense clamped down. This win improves the Cavs’ season mark to 44-17.

Cleveland head coach Tyronn Lue was asked about the team’s ability to make such a comeback:

“It means something to me, it shows me something,” Lue said. “We didn’t hang our head, we didn’t pout.”

Kyrie Irving, who scored eight points in the second quarter, spoke about bouncing back:

“They got off to a hot start, but we didn’t panic.”

James spoke about what happened to boost the Cavs in the second quarter:

“(It was) spearheaded by Kyrie and our defense,” James said. “Once we settled in, we got a lot more physical on the defensive end.”

Irving chose to give a good deal of the credit to Shumpert:

“When he’s able to rebound like that, we’re able to push,” Irving said. “He makes a lot of our jobs easier.”

The Cavaliers were in danger of getting blown out in the first quarter as the Celtics raced out to a 35-17 lead before the Cavs notched the final five points of the quarter. Boston connected on 60 percent of their attempts, including 5-of-7 from long range, while Cleveland managed just a 40 percent rate on their field goal attempts during the opening 12 minutes.

In the first few minutes of the second period, the Celtics kept up their hot shooting by hitting four of their first five and held a 45-31 lead with 8:56 left before intermission. The Cavaliers then charged back with 12 unanswered points and held Boston to 27 percent on their field-goal attempts the rest of the quarter. By the time the halftime horn sounded, the Cavs held a 55-54 lead.

In the third quarter, the two teams traded leads before the Cavaliers ended the quarter by scoring eight of the last 10 points to hold a 91-83 lead with one quarter left. Cleveland made the most of their field-goal attempts by hitting two-thirds (12-of-18) during the period.

The Cavs continued to boost their lead in the final quarter as the Celtics managed just three field goals and ended that period by hitting just 21 percent of their 14 shot attempts.

Matthew Dellavedova finished with 10 points and four assists, but matched Shumpert in the plus/minus category for the game with +26. Lue spoke after the game about his value to the team:

James reached another unique milestone in his storied career, reaching double figures in points for the 700th straight game. The only two players with longer streaks are Michael Jordan and Kareem Abdul-Jabbar.

Asked about it afterward, James

“It’s always great when you’re mentioned with the greatest to ever play this game,” James said. “It means a lot to my family and I’m glad I’m able to do that.”

The Cavaliers have one more game at home before they begin a four-game Western road trip. That contest will be Monday night, when they host the Memphis Grizzlies in a game set to tip off just after 7 p.m.