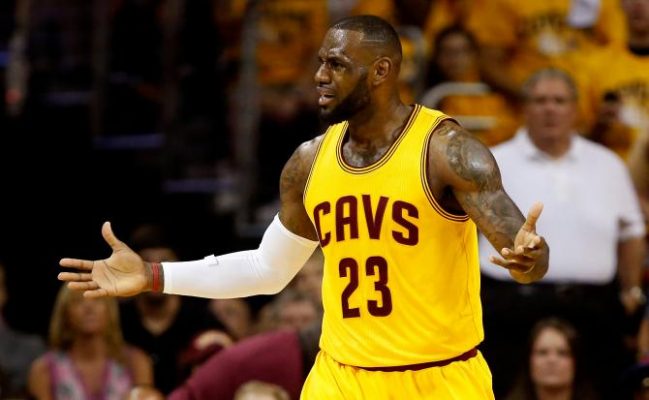 The war of words against LeBron James just continues to grow. And as usual, it comes from someone who no longer has to suit up against the four-time MVP.

This time it was Antonio Davis, a 13-year NBA veteran, as he did a guest spot on the Russillo & Kanell Show on ESPN earlier today.

When asked if it seems as though current NBA players are more likely to go after James, both mentally and physically, Davis confirmed those ideas and added that NBA players no longer fear James.

“There is just no fear,” Davis said. “You figure you can get under his skin. Or you double team and he’s going to pass it out. He’s not going to make you pay for calling him that name. I think some of it starts with all of the — there is and and-one and he’s patting on his bicep looking at his biceps, and then the next play you see him flopping.”

But Davis wasn’t done there. He added that when he watches James play himself, he often finds himself referring to James the same way that Draymond Green did in Game 4 when he repeatedly called him a b—-.

“Guys don’t fear what this guy will do to them. When I’m watching, I want to call him that sometimes. I’m just like, ‘Dude, go dominate the game.’ Talking about, well they aren’t calling fouls for me. I only have 17 foul shots. You don’t have a charge. You ain’t running nobody over. You got all them muscles and you patting your biceps. Go run somebody over. Force them to call fouls on you. If not, you are a B.”

Through the first four games of the series, James has attempted just 17 free throws, knocking down 12 of them. According to UPI, he is the series leader with 17 drives and 91.3 touches per game.

And as most within the Cleveland Cavaliers organization would argue, James could not be drawing much more contact than he currently is without blood being drawn.

But for Davis, those statistics and the 13 years of history the NBA has in watching James collectively make the right basketball play, is apparently not enough evidence to not refer to him in a derogatory fashion.

Davis also told Russillo and Kanell that he would never refer to Michael Jordan in such a manner, because Jordan would “make you pay.”

“It’s not like you have this respect that if I call (James) out of his name or if I go at him somehow he’s going to make me pay. I think that’s why guys are so readily and so quick for that word or one of those words to come out of their mouths.”

Of course, being that Davis made just one All-Star appearance in his 13 year career, perhaps it was simply that Davis was in no position to be trash-talking anybody, let alone Jordan.