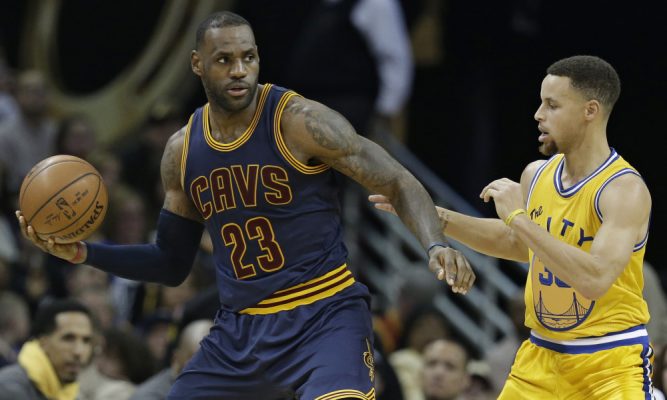 There’s not much going LeBron James‘ way at the moment.

After his team barely put up a fight in Games 1 and 2 to the Golden State Warriors and saw themselves get disintegrated and embarrassed, all odds are in favor of the defending champions.

Back-to-back MVP Stephen Curry and All-Star mate Klay Thompson still haven’t hit 20 points, yet the Warriors have demolished the Cleveland Cavaliers in every facet of the finals so far.

With teammates Kyrie Irving and Kevin Love struggling mightily, it’s mainly on James to get the Cavs out of this mess. While it may seem like a pipe dream to overcome the 0-2 hurdle his squad is currently facing, a few think James can do it.

So much so that legendary coach Phil Jackson, who previously coached Michael Jordan and the Chicago Bulls, believes James can do the unthinkable. 23 years ago when the Jackson-coached Bulls fell in a 0-2 hole to the New York Knicks in the 1993 Eastern Conference Finals, Jordan triumphantly led the Bulls to four straight wins to advance to the next round.

After reading papers, which criticized the Bulls superstar for his off-day activities in an Atlantic City Casino, the five-time MVP averaged 32.2 points in the team’s four victories, including a 54-point outing in Game 4.

Jackson thinks James can take the Jordan situation in 1993 and apply it to this year’s finals, via the New York Daily News:

“It did something to Michael Jordan. You learned something about pulling the cape of Superman. It’s not a good idea. He was a man possessed after that,” Jackson said at the Chelsea event sponsored by American Express. “I think it’s going to take something for LeBron to step into that. Put his cape on and say, ‘I’m going to have to take over a lot of this series, doing the things beyond my level or my normal capacity.’ He’s been a team player up until this point but I think he’s going to have to step beyond that.”

The two-time champion took just 38 shots in Games 1 and 2 while trying to find ways to get other guys involved. That obviously hasn’t worked and may ultimately lead James to spearhead the scoring effort during Game 3. If the Cavs want to win this series there’s no doubt James will have to step into the shoes of Jordan at one point or another.