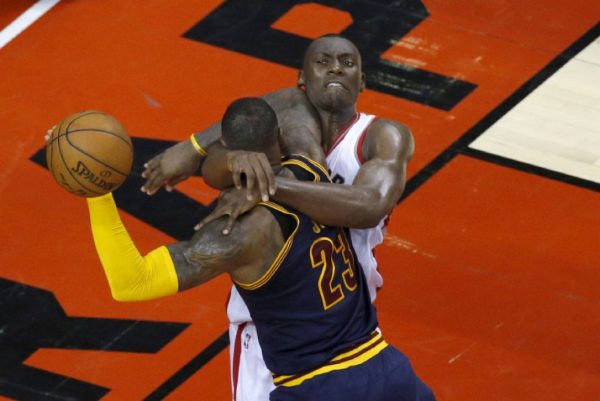 The Toronto Raptors got its first victory of the Eastern Conference Finals on Saturday night as center Bismack Biyombo played a huge part by hauling down 26 rebounds and blocking four shot attempts.

The 6’9″ center also increased the level of physicality for Toronto in the paint, particularly when it pertained to Cleveland Cavaliers superstar LeBron James. There was one particular play where Biyombo was called for a flagrant foul on James and he was asked about it after the game.

Reporter: “On your flagrant foul, you were obviously trying to prevent LeBron from scoring, but do you feel also that you kind of need to set a tone for Toronto? That you guys are going to stand up to Cleveland and be physical?”

Biyombo: “It’s not like I did it to hurt somebody. I never play this game to hurt nobody. And I get fouled pretty much the same way and I don’t fall on the ground badly.”

The question starts at the 4:35 mark below.