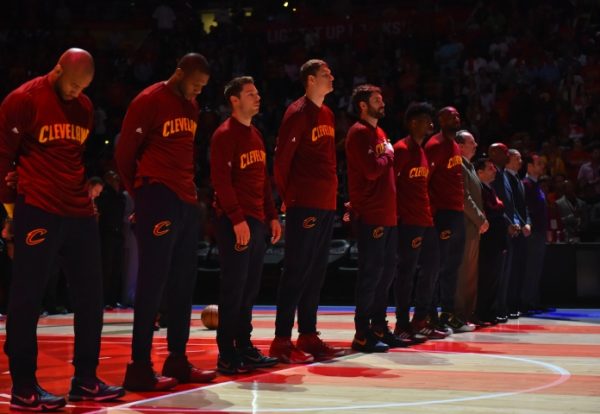 The many controversies of the Cleveland Cavaliers have been very well documented throughout the year. There has been a coaching change, LeBron James unfollowing the Cavs on Twitter and a declaration of a desire to play with other superstars before his days are up.

Let’s just say, there have been more than a few stories that have attempted to analyze the Cavs’ chemistry, or lack thereof.

But in an ESPN media conference call Monday afternoon, ESPN personality Jeff Van Gundy broke down for CavaliersNation.com just how important team chemistry is when pursuing the ultimate prize, and also just how much chemistry he feels the Cavs have entering the Eastern Conference Finals against the Toronto Raptors.

“Listen, chemistry is important to playing very well. I think talent is more important. I think winning brings chemistry while losing divides teams usually. Cleveland has won spectacularly the last two years, so I would expect their chemistry to be high, despite the fact that the (Cavs) really haven’t played in any adversity (in these playoffs),” said Van Gundy.

Last season, the Cavs faced plenty of adversity come playoff time. Kevin Love was forced to the sideline in the Boston series. And just when it looked as though Kyrie Irving was poised to outplay Steph Curry in the finals, a knee injury put him in street clothes for the remainder of the season. Despite that, James and the Cavs were able to push the NBA Finals to six games.

This season, however, the Cavs have been relatively healthy, and have looked incredibly strong through the first eight consecutive wins of these playoffs.

But will the “smooth sailing” and strengthened chemistry be the reason the Cavs bring home the Larry O’Brien Trophy? Only time will tell, according to Van Gundy.

“I think usually what happens is that many times we wait to see the result. And then we talk about the chemistry after the fact as a reason why a team won or lost. I don’t think people usually predict chemistry as a team is going through the season,” said Van Gundy. “All (the Cavs have) had is smooth sailing. Last year, they made it to the finals with a hurt team. This year, they’ve had the best record in the East from the get-go. They’ve played exceptionally well and they’ve swept the first two series.”

According to Cleveland.com, several people within the Cavaliers organization have noticed a shift in chemistry since earlier in the season, with GM David Griffin being one of the most notable to voice his opinion on the team.

“This is special,” said Griffin as he watched his team converse with each other in the lobby of the Four Seasons before Game 4 of the second-round matchup with the Atlanta Hawks. “This wasn’t here before.”

One of the main differences between the no-chemistry Cavs and the full-chemistry Cavs has been the arrival of Channing Frye. After joining the team from Orlando in February, Frye has been an important player on the Cavs, evening draining seven 3-pointers for 27 points in the Game 3 win over Atlanta.

“I think we all understand what type of situation this is and what type of opportunity we have, and to be honest, there are just cool dudes on this team,” said Frye in the aftermath of the Game 3 win. “Everybody has their friends on this team and we all enjoy each other’s company.”

And if the Cavs have the kind of chemistry that Van Gundy, Griffin and Frye are all claiming, this team may be unstoppable. And if talent is more important than chemistry, look no further than James, Love and Irving.

There is more talent in those three players than most teams have in their franchise’s history.

If Van Gundy is right about how chemistry is affected, as it currently sits, the Cavs are just eight games away from being the team with the best chemistry in the league.

“Winning breeds great chemistry, and they’ve got it. They are playing exceptional basketball,” said Van Gundy.