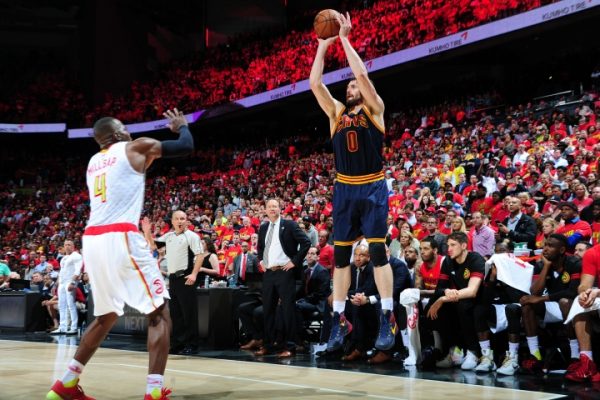 (Atlanta, GA) – Using a 24-5 fourth-quarter run and tight defense, the Cleveland Cavaliers took a commanding 3-0 lead in the Eastern Conference semifinals with a 121-108 comeback win over the Atlanta Hawks at Philips Arena on Friday night.

Atlanta led 101-93 with 9:14 remaining, but a Kyrie Irving three-pointer just 12 seconds later was the spark that Cleveland needed. The Cavs defense then limited the Hawks to 3-of-14 (21 percent) from the field for the remainder of the game.

“Kyrie hit the reset button and he turned it on in the fourth quarter,” LeBron James said immediately after the game.

Four different Cavaliers scored more than 20 points in the contest, led by veteran reserve Channing Frye, who connected for 27 points, with seven three-pointers and seven rebounds for good measure. Right behind him was the duo of Irving and James, who each hit for 24, while James and Kevin Love picked up double-doubles on the night.

“This is probably the best chemistry team I’ve been on in my career,” Frye said. “I just want to earn my keep here.”

James actually came close to a triple-double with 13 rebounds and eight assists, while Love tallied 21 points and 15 boards, with his three-pointer serving as the dagger with 1:36 left to make it 116-106.

“We just tried to hold on and stay within striking distance, and we were able to adjust in the fourth quarter,” said Cleveland head coach Tyronn Lue.

The three-pointer was once again the weapon of choice for the Cavs, who connected 21 times from long-range. As opposed to Wednesday night’s blowout, the Hawks kept pace for much of the game in that department with 16 three-pointers.

“In the second half, I said screw it, I’ve got nothing to lose,” Frye said. “I felt we needed this win, so I just had to turn the barbecue on.”

Despite the Cavaliers dominating the boards with a 55-28 advantage, struggles at the foul line and turnovers during the first three quarters put them in danger of losing the contest. For the game, the Cavs made just 16-of 27 from the charity stripe, and committed 18 turnovers.

Those issues didn’t dampen the enthusiasm in the locker room:

“It was a full team effort, a lot of things that won’t show up in the box score,” Love remarked. “We know we have a lot of work to do, Sunday included. It’s going to be tough.”

One of Atlanta’s strategies was fouling Tristan Thompson, who went to the line 12 times, but made only five of his attempts. However, during the fourth-quarter surge, the Cavs committed no turnovers, and Thompson’s work on the glass was dominant, with 13 rebounds, including nine on the offensive end.

While the Hawks spoke a great deal about karma and taking retribution for Wednesday night’s record-setting three-point night in Cleveland, the first half saw them on the receiving end of four different painful moments, with each player landing hard on the court.

Unlike Game 2, when the Cavaliers held an 18-2 advantage at halftime in three-pointers, this contest was more balanced during the first two quarters in that department, with Atlanta holding a 10-9 advantage. One of the main thorns in the Cavs’ side was Kyle Korver, who drilled four three-pointers in the second quarter after having been held in check during the first two games.

“I thought we were relaxing too much,” Lue commented. “But I like the way that we kept our composure and weathered the storm.”

In the third quarter, the Hawks were nearly able to push their lead up to double-digits, but the Cavs were able to slice their deficit by the end of the quarter.

“We did some uncharacteristic things with the 18 turnovers, but we still ended up with 26 assists,” James said. “We have to play well for four quarters on Sunday because they’re going to give us everything they’ve got.”

The two teams take the court again in Atlanta on Sunday afternoon for Game 4, with tipoff set for just after 3:30 p.m. ET.