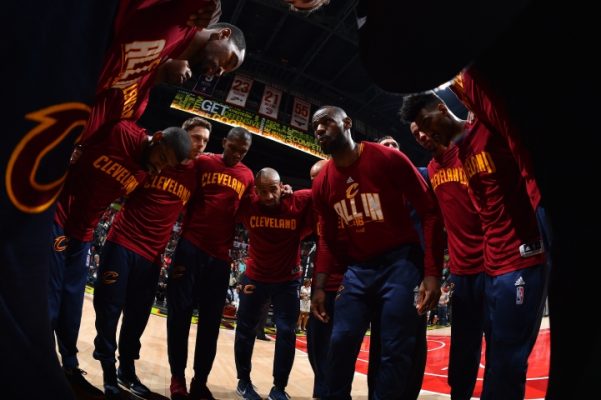 (Atlanta, GA) — For the fourth time in eight playoff games, the Cleveland Cavaliers’ Big 3 of LeBron James, Kyrie Irving and Kevin Love all scored 20 or more points and the Cavs kept their brooms intact by completing its 4-0 second-round sweep over the Atlanta Hawks with a 100-99 win Sunday afternoon at Philips Arena.

James forced a jump ball with just 2.8 seconds remaining with Dennis Schroder and barely won the tap as Paul Millsap’s last-second shot fell just short to allow the Cavs to escape with the win.

“We knew Atlanta was a tough team, and the close-out game is the hardest to win. They gave us everything they had, but we stuck with the game plan,” said head coach Tyronn Lue. “It just feels good to get a win like this on the road.”

Love was on fire from deep, hitting 8-of-15 from behind the arc for 27 points to go along with 13 rebounds. Meanwhile, the four-time MVP finished with 21 points and just missed a triple-double with 10 rebounds and nine assists. Irving controlled the offense all game long and turned in a classic point guard line of 21 points on 50 percent shooting with eight assists.

“We just are in a great rhythm right now, as far as us three. We know where we want to be on the floor, we know exactly where we are on the floor and it’s benefited all us individually, and obviously it’s trickled down to the team,” said James.

After warning the Cavs that the Hawks would come out strong in the first, Lue was proven right as Atlanta used a few quick fouls on Tristan Thompson to jump out to an early lead.

With Thompson on the bench with those early fouls, Millsap took advantage of every matchup he had in the opening minutes by scoring from all over the court. He hit mid-range shots, buried a 3-pointer and continually punished the Cavs from the post. He was 5-for-6 from the field with 15 points and five rebounds in the opening frame.

Thanks to that, the Hawks held a 36-27 lead heading into the second quarter.

“In the first half, Tristan got into foul trouble. Millsap hurt us in that first quarter, so we had to go small and put (Richard Jefferson) on him. We didn’t guard him as well as we wanted to, but our guys fought. I mean he’s a tough matchup. He’s a guy who can play some three, play some four and five. He’s just a tough matchup all around,” said James.

The Hawks were able to push that lead all the way up to 12 early in the second, but once Thompson re-entered the game, the Cavs began to find holes in the otherwise suffocating Atlanta defense.

Love, who started the game 1-for-6 from the field, buried three 3-pointers in the second quarter and was half of a dynamite pick-and-roll combination with Irving, who finished the half with 14 points and four assists.

Thanks to that potent offensive combo, the Cavs almost completely erased the 12-point Hawks lead and trailed by just two at the half, 58-56.

After intermission, Love just kept on grooving. He opened up the third quarter on fire, drilling three early 3-pointers and gave the Cavs their first lead since early in the first quarter at 68-66 with just over three minutes gone in the second half.

The two teams each traded buckets and turnovers for the next two minutes before Love again came through from behind the arc. With the game tied at 75-75, Love buried a 3-pointer while being fouled by Thabo Sefolosha. He converted the 4-point play and gave the Cavs a 79-75 lead late in the third.

“Kevin just stayed with it. I think he missed his first four or five shots in a row, but then he came back and made two big threes in a row. That’s how he’s been. He’s been staying with it,” said Lue. “Tonight he stayed with it, stayed the course, and really had a big third quarter that got us over the hump.”

With Love and James on the bench to start the fourth, the Hawks were able to quickly erase a four-point deficit and tie the game back up at 87-87 with 7:20 left in the game when the pair of All-Stars came back into the fray.

But both teams went cold down the stretch of the fourth quarter, and with just under four minutes, the score was stagnant at 89-89. That’s when James and Irving made back-to-back layups following smooth moves to give the Cavs a 93-89 advantage and late-game momentum with just under 3:30 remaining in the game.

Except the Hawks were not quite done, as Schroder scored 11 of his 21 points in the final frame and his speed proved too much for the Cavs defense in the fourth quarter. In the final moments, Schroder diced his way through the lane on a few consecutive possessions to give the Hawks the 97-96 lead with just 1:31 left on the clock.

“They played a lot like us, they stuck with their game plan. They are well coached and have a number of weapons on their team,” said Love of the Hawks offense in the final minutes. “They were in a good rhythm. We knew they were going to punch us in the mouth and give us everything they had.”

Luckily for the Cavaliers, they have the best player on the planet, and the two-time champion scored the final four points for Cleveland, including a clutch jumper with 39.2 seconds to put his team up 100-97.

“It became a two-minute game for us, where we were able to make plays and get stops when we needed to. It was a great series to close out,” said Love.