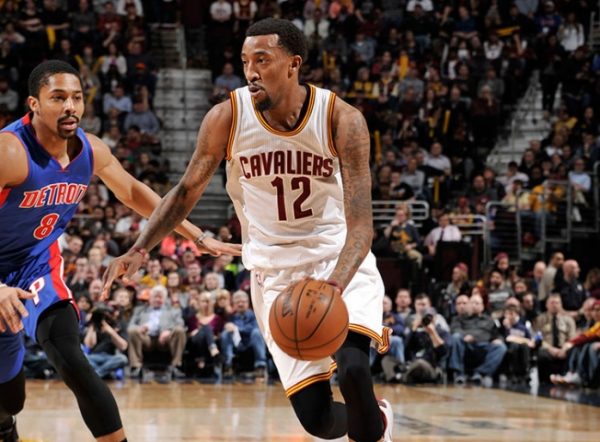 (Cleveland, OH) – Despite 36 points from Jordan McRae, the Cleveland Cavaliers closed out the 2015-16 regular season on a down note by losing 112-110 in overtime to the Detroit Pistons at Quicken Loans Arena on Wednesday night.

During most of the second half, Detroit was able to maintain a big enough cushion to keep the Cavaliers in check. Still, Cleveland kept trying to chip away at the lead, getting to within four with just over nine minutes left.

The Cavaliers finally made their move in the last two minutes of regulation, outscoring the Pistons 9-2, with McRae sending the game into the extra session on a three-pointer with 14.6 seconds left.

In the overtime, with Cleveland trailing 112-109, McRae had a chance to send it to a second overtime after getting fouled from beyond the three-point line with 1.9 seconds left. However, he missed the first two attempts to end the comeback hopes and the Cavaliers ended the regular season with a 57-25 record.

“The biggest thing was that my peers were proud of me and that feels good,” McRae said after the game. “Usually, it’s the other way around.”

McRae also added seven assists and four rebounds, and was one of five Cavalier players to score in double figures. Richard Jefferson contributed 16 points, while Timofey Mozgov picked up a double-double with 14 points and 12 rebounds. Channing Frye matched Mozgov in the point category and also added six boards, while the team’s newest member, Dahntay Jones, scored 13 and hauled down five rebounds before fouling out.

“He (McRae) cramped up at the start of the fourth quarter,” Cavs head coach Tyronn Lue said. “But getting to play in an NBA game and putting up numbers like that was big for him.”

Jefferson spoke about his role and the season as a whole:

“As a veteran, I just have to stay ready,” Jefferson said. “We haven’t had as good a season as we’d like, but you can’t scoff at 57 wins.”

Lue rested his starters in anticipation of the start of the NBA Playoffs, although Tristan Thompson was technically the only Cavaliers starter to play in the contest. However, his entire night consisted of four seconds on the court. The cameo appearance was to simply extend his consecutive games streak to 370, the longest current streak in that category in the NBA.

“I think we’re in good of a place mentally as we’ve been,” Jefferson commented after the game. “I think if you look at Shump and the way he attacked the basket and the way he’s starting to learn that that’s what we need from him, Kyrie is starting to get into his rhythm and ‘Bron is playing at an extremely high level. I think Kevin’s getting more comfortable.”

The Cavaliers will begin the postseason at Quicken Loans Arena against the Pistons on either Saturday or Sunday, with all information to be officially announced on Thursday. The strong likelihood is that a 3:30 p.m. contest on Sunday afternoon will be the choice, which is how they began last season’s playoffs against Boston. There is a previously scheduled Arena Football League game at Quicken Loans Arena set for Saturday night.