Cleveland Cavaliers vs. Orlando Magic Game Recap: Back on Track 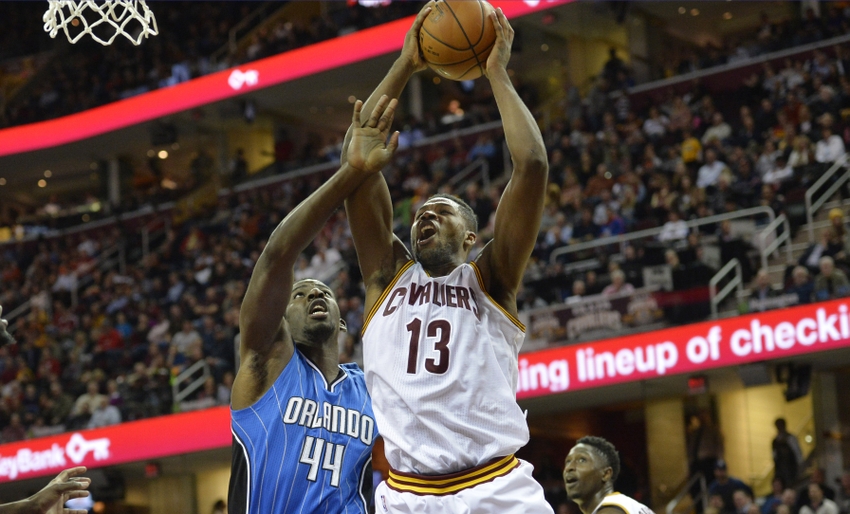 (Cleveland, OH) – Putting together a full 48 minutes of consistent play, the Cleveland Cavaliers put an end to their four-game losing streak with a 106-74 victory over the Orlando Magic in Monday night action at Quicken Loans Arena.

The Cavs dished out 30 assists, hauled down 44 rebounds while also shooting better than 50 percent from the field in the dominating performance that saw Cleveland maintain double-digit leads from the final minute of action in the first quarter until the end of the game.

After the game, a relieved Cavalier Head Coach David Blatt said, “We needed a game like this,” before adding later on, “Tonight was a good small step.” Blatt was most impressed by the 30 assists and 30 points from the team’s bench.

Blatt also praised the team’s solid defense saying the best part was, “That it was consistent; that we maintained. Your goal should be 22 points or less in a quarter, and we did that.”

In the opening quarter, LeBron James dominated the action, scoring 16 points and dishing out four assists. By the end of the game, James had collected a double-double with 29 points to lead all scorers to go along with 11 assists.

James praised the team’s defense on the night in his postgame comments. “Defensively, we were in tune,” said James, “For the most part, we did a good job at the point of attack.”

However, James noted that the team’s defense was still a work in progress by adding, “We still have to do a better job of communicating.”

The Magic had jumped out to a quick 4-0 advantage, but the Cavs put together a 13-2 run after a James three-pointer with 6:34 to play made it 13-6. Orlando would get no closer than three the remainder of the quarter, with James fueling an 8-2 to surge to close out the final 3:07 of first quarter action to make it 26-16 in favor of Cleveland.

After being held scoreless in the opening 12 minutes, Kyrie Irving notched the first five points of quarter number two to make it a 15-point lead for the Cavaliers. The margin would jump to 18 after the latter of two consecutive field goals from Kevin Love with just under six minutes remaining before intermission that made it 41-23.

Cleveland would take its biggest lead of the first half on a Tristan Thompson dunk with 3:39 to play that made it 48-27. The Magic could only whittle the deficit to 14 with 1:22 remaining, but James sandwiched a pair of baskets around an Irving layup that made it 56-38 at the half.

The Cavalier defense had the badly-needed intensity that was required after their problems last week, holding Orlando not only to 38 first half points but 32 percent shooting from the field during the first two quarters.

In a halftime interview, the Cavs’ Shawn Marion remained focused after being asked about the defense and what was needed in the second half, saying, “Sustain the effort. We have to put together a complete game.”

In the first three-plus minutes of the second half, there was some concern of a letdown as Orlando got the deficit down to just 12 at 60-48. However, veteran Anderson Varejao helped jump-start another run, scoring 10 points in a five-minute span as Cleveland ran off 12 straight points to take a 72-48 lead with 5:14 left in the quarter, and was never challenged again.

Varejao noted that ever since Byron Scott’s tenure with the team, Cavalier coaches have been urging him to shoot more, saying it helped in that, “It gives you the confidence to shoot the ball.”

The veteran also took note of the team’s assist total on the night, commenting, “It’s great when we move the ball, we’re a much better team. We can’t be playing one-on-one.”

In the final 12 minutes, the Cavs’ lead would get as high as 33 at 95-62 following a Thompson dunk at the 7:32 mark. That advantage would hover around 30 points the rest of the way.

Irving stated in the postgame locker room that the consistent play on the evening was due to better on-court coordination saying, “The focus level on helping each other out. Communication was a big part of that.”

Regarding James essentially taking over his role at point guard during the course of the game, Irving had no problems with it. “As long as I’m ready to shoot, I’m good.”

James himself saw no pressure from the comments he made earlier in the day in which he criticized himself for the team’s mediocre start, simply saying, “No one puts more pressure on me than myself.”

In reference to those comments, Blatt said. “He’s proven himself in this league for 12 years. His influence is widespread and the impact he has made on those around him. That’s consequential in every respect.”

The win improves Cleveland’s mark to 6-7 on the year, while Orlando drops to 6-10.

The Cavaliers will have a chance to get some revenge on the Washington Wizards on Wednesday night. The Wizards, who defeated the Cavs just three nights ago, will be at Quicken Loans Arena for the 7 p.m. tipoff.