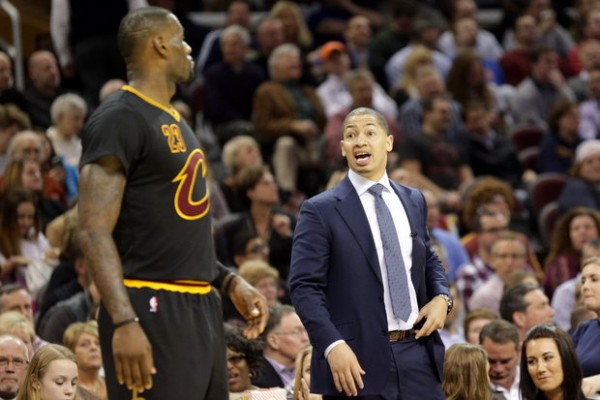 On March 19, the Miami Heat welcomed the Cleveland Cavaliers to South Beach and promptly dismantled the Cavs by a final score of 122-101. In that game, LeBron James had 26 points, three rebounds and three assists, but the only part of his performance that drew attention from head coach Tyronn Lue was his halftime antics.

During the halftime break, James was seen chatting with former teammate Dwyane Wade instead of warming up with teammates. The actions, according to Cleveland.com, rubbed Lue the wrong way.

“I just told him we can’t have that, being down like we were and him being the leader,” Lue told Cleveland.com. “Just me being a competitor, I didn’t like it. We had a long talk about it. It was good. He understood, he apologized, and he’s been great.”

Since that March 19 game, James has been on a tear, averaging 27.1 points, 8.8 rebounds and 10.5 assists per game. The Cavs have also gone 7-1 in the eight-game stretch and the four-time MVP has amassed a plus/minus of +127 in those games.

According to ESPN, James’ play has increased several team statistics as well. Before the meeting with Lue, the Cavs ranked 15th in assists per game in the NBA. Since March 19, they are second. They are also averaging about 10 more passes per game and leading the NBA in field-goal percentage coming off of assists.

The uptick in James’ numbers seem to coincide with notion that he is switching into “playoff mode” a little early. And his decision to enter this mode earlier seems to have been influenced by the talk with Lue, along with another conversation between James and general manager David Griffin.

His conversation with Griffin stemmed from the March story of James willing to take a pay cut in order to play with Carmelo Anthony, Wade and Chris Paul.

After a season full of subtweets, questioned loyalties and inconsistent play, it seems as though James and the Cavaliers have started to put the regular season behind them in preparation for the postseason and a hopeful title run.

“We’ve had some ups and downs, but for the most part, we’ve had way more ups, and for our team, we’re in a good place right now with a week and a half left in the regular season,” said James. “It’s a perfect time to be clicking, and we’re clicking right now, so it’s perfect for our team, and everyone feels in a good rhythm offensively and defensively. We know what we want to do, and we can go out and execute that.”